Last Summer, Smith announced that the museum was up for sale.

To this day, there has been no concrete offer for the collection, which currently comprises 1,335 decorated toilet seats dedicated to everything from the Berlin Wall to Star Trek. “I don’t know where they’ll be going. I think London has already mentioned that they want it, and Germany, or some other foreign country. That’s too far for the [Fiesta] Pooch Parade. They won’t be going up to London to have a Pooch Parade,” Smith said.

What has happened, though, is an increase in press coverage, a spike in museum attendance, and an urgency to document the legendary Toilet Seat Art Museum. Cattywampus Press, a micro publisher based in Austin and run by Lindsay Starr and Daedelus Hoffman, plans to publish a book about Barney Smith’s life and work, titled King of the Commode. 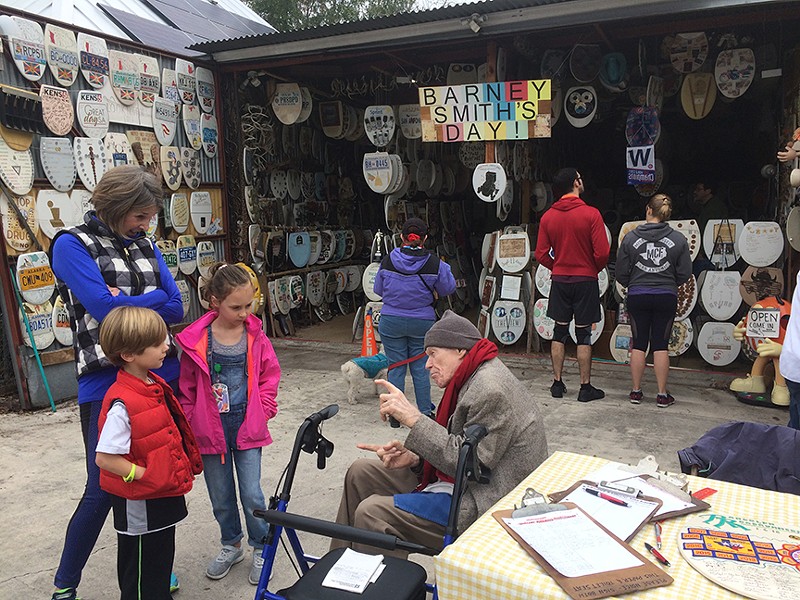 On December 1, they started a crowdfunding campaign on Kickstarter. With only a few days remaining, they are under $3,000 shy of reaching their goal of $30,000.

“It’s not like any other museum. Meaning that none of the usual structures and strictures of the museum apply. Visitors are encouraged to handle and even make marks on the artworks. Everything is participatory,” Starr said. She added that she hopes King of the Commode “will demonstrate to cultural institutions that [the museum] is worthy of preservation.”

As for the nickname “King of the Commode,” Smith credits one of the many talk show hosts who’ve interviewed him over the years: “Montel Williams is the one who first made mention of the ‘King of the Throne.’”