A Laredo native who moved to the Alamo City as a child, David Alcantar studied art at San Antonio College and earned a BFA from the University of Texas at Austin before relocating to Boulder to pursue an MFA at the University of Colorado. Drawn to both conceptualism and the narrative possibilities of painting and drawing, Alcantar explored "the concept of beauty" in his 2004 thesis, asserting that "the manifestation of beauty occurs only through sincere gesture."

Since returning to San Antonio, Alcantar has exhibited work locally (at Blue Star Contemporary, the Guadalupe Cultural Arts Center and Freight Gallery, among others) and nationally (from Kansas and Louisiana to California and New York), often presenting work he’s summed up as "investigations and illuminations of the universal human characteristic of choice, or free will, with specific focus on negotiation behavior." More specifically, Alcantar breaks down his "Fundamental Negotiation Interests" into four categories: pleasure, time, wealth (or accumulation), and structure/discipline.

Outspoken and academic yet disarming and thoughtful, Alcantar has taught drawing and design (with an emphasis on "conceptual development and consideration") at San Antonio College, served on the board of Contemporary Art Month and the Luminaria Artistic Advisory Committee, written for the Rivard Report and voiced concerns about weighty issues affecting San Antonio’s art scene.

But despite his concentrated work and consistent contributions to our creative landscape, Alcantar still flies slightly under the radar — and it’s safe to say many of us don’t know his full story or understand the breadth of his work. For starters, he’s been tattooing for 20 years (with increased dedication in the last seven) and often works out of Flesh Electric Tattoo (2110 McCullough Ave., fleshelectricstudio.com). While he’s been somewhat weary of the intersections between his fine art and tattooing practices (and rarely presents himself as a tattoo artist in the company of fine artists), he’s also conducted research on consumer behavior — weighing the relative ease of commissioning a tattoo against the seemingly unapproachable concept of purchasing a work of art.

Intentionally blurring — and questioning — boundaries between the two disciplines, Alcantar’s new solo show "Skin in the Game: Act 2" took over FL!GHT Gallery at the beginning of January with works that place "the language of tattoo into the framework of fine art, and vice versa." Beyond employing tattoo aesthetics in paintings involving animals, text and popular imagery, the exhibition drops amusing references to art stars (Andy Warhol, Jeff Koons, Matthew Barney, Claes Oldenburg and Damien Hirst among them) as well as San Antonio-specific artists and objects — from Ethel Shipton and Ricky Armendariz to Alcantar himself and a certain Venetian straw boater hat that’s often on the head of King William treasure Mike Casey. But during a pair of opening receptions, the star of the show was undoubtedly Alcantar, who converted FL!GHT’s cozy, salon-style back room into a functioning tattoo parlor where guests could pick out a design from "The Local Artist Flash," and get inked on the spot, free of charge. In essence partaking in a performative aspect of the exhibition, a handful of guests struck up longterm relationships with a balloon dog, a clothespin, the ancient artifact Venus of Willendorf and, in the case of actor/man about town/Cornyation emcee Rick Frederick, Mike Casey’s favorite hat.

For the remainder of the show’s run, Alcantar will be keeping semi-regular hours in the gallery (roughly 10 a.m. to 3 p.m. and 7 to 10 p.m. Monday through Friday) to collect data from guests about "their art collection and consumption habits" (in person or via the QR code included below) and chat with them about "their tattoos and why they got them [and] what other tattoos they’re considering and why." He’ll also be finishing up two works in progress in anticipation of the show’s closing reception (or "conclusion," as he’s calling it) on January 27.

Not long after attending the First Friday opening (and seriously considering purchasing a smartly priced painting of a tiger pummeled with arrows ... someone beat me to it), the Current caught up with Alcantar to dig a little deeper into his process and artistic intentions.

You normally don’t mention to folks that you work as a tattoo artist. Why is that?
Prior to this artistic project, I wouldn’t tell people (particularly in the art community) about my tattooing, because I didn’t want to bias people’s opinions of me or my work by introducing a layer of information, whose visual language, largely, isn’t present in my usual artistic endeavors. Put another way, I would wish for people to consider me more as a painter who also tattoos than as a tattooer who also paints.

What led you to riff on famous artists alongside locally famous icons like Mike Casey’s hat?
The central question of the project is: Why do ordinary people, of the same demographic that museums and galleries are trying to target, seem to be more willing to consume, by way of purchase, tattoos over fine art? In pursuing this question, it seemed to make sense to me to translate iconic imagery from art history into tattoos to see if people might be more willing to "collect" art if it is in a format that they already seem to be willing to consume. It is important to note, however, that these are parodies of iconic art-historical images. Within the context of the gallery, to those who are familiar with art history, the references will be obvious. But outside of the context of the gallery, and for those unfamiliar with art historical iconography, the drawings would just be weird tattoo flash. Since it occurred to me that people might not be familiar with art historical imagery, perhaps they would be more familiar with the imagery of local artists and, therefore, eager to collect that. So "The Local Artist Flash" was created, of which there are currently only two sheets.

What can you tell me about the exhibition title?
The title for the show and the project comes from a common saying regarding investment: The more you invest into an endeavor, the more "skin" you are said to have in the "game." This means that you have more ownership of the endeavor and more rights to its rewards. Conversely, you also have more risk of loss. In this case, the "game" is art. For those of us who take art very seriously, we have invested our entire selves into it — even at our own financial detriment, because we believe very much in it. Considering that [my] central question about art consumption and expectation was being investigated by way of tattoo, I thought a literal reference to skin was also quite clever. The show is subtitled "Act 2" because the first act was the organization of the research and survey that I used to gather data.

Can you expand a little on the research and survey?
My hypotheses were: A) People were buying tattoos more than fine art because of the amount of control they had with commissioning a tattoo versus a piece of fine art. B) People were put off by galleries and museums because of the esoteric way that we — those of us [who are] closely associated with art institutions — tend to talk about art, which is not at all how tattoo shops talk about their works or their customers’ ideas. The survey that I came up with tried to collect as much data [as possible] to prove these hypotheses. Thus far, it has proven something else: that the kind of ownership one has with a tattoo, and the meaningfulness that one obtains because of that kind of ownership, is a very compelling reason to buy a tattoo over traditional fine art — despite the fact that there is absolutely no financial return on investment with a tattoo.

Slideshow Beyond Flash: Get to Know the Work of Painter and Tattoo Artist David Alcantar 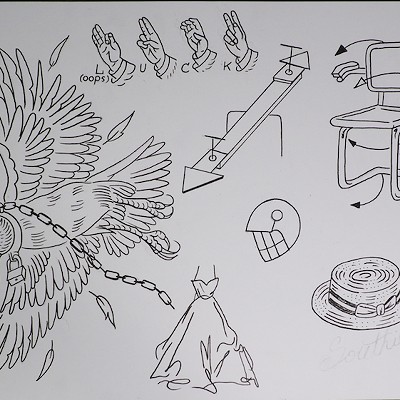 Beyond Flash: Get to Know the Work of Painter and Tattoo Artist David Alcantar
By Bryan Rindfuss
Click to View 20 slides
Want to keep up with all the happenings in San Antonio? Subscribe to our Weekend Newsletter.