Constructed in conjunction with HemisFair ’68 and named in honor of the first Mexican American elected to the Texas State Senate, the Henry B. González Convention Center has evolved over the years but drastically transformed in 2016. Hailed as “the largest capital improvement project in the City of San Antonio’s history,” the two-year-old, $325 million expansion increased the footprint to an almost-incomprehensible 1.6 million square feet. While the undertaking involved the demolition of the west wing, it thankfully preserved Guatemalan artist Carlos Mérida’s 1,440-square-foot glass-tile mosaic mural Confluence of Civilizations Previously an indoor backdrop for a spiral staircase, it’s now outside — facing its kindred spirit on the facade of the Lila Cockrell Theatre: Mexican artist Juan O’Gorman’s Confluence of Civilizations in the Americas (which shares its name with HemisFair’s official theme).

While non-local art is nothing new to the Convention Center (starting with the landmark murals by Mérida and O’Gorman), the venue does hold works by local artists — from early Texas painter Porfirio Salinas and late printmaker/ceramicist Alex De Leon to creative reuse pioneer Anita Valencia and flamboyant folk art fusionist David Zamora Casas — and a recent round of acquisitions, loans and commissions essentially levels the playing field, with 25 of the total 48 artists representing San Antonio.

Nodding with its title to a theme that trickled through the space’s earliest artistic focal points, “Confluence: Art at the Convention Center” seeks to provide visitors “with an art historical overview of San Antonio’s contributions to the visual arts” while “reflecting the city’s growth and dynamic connections to Mexico and Texas history.” Spearheaded by the City of San Antonio Department of Arts & Culture, art advisory committees and art historian/curator Ruben Cordova, the project incorporates works from guards both old (Jesse Treviño, Alberto Mijangos, Verónica Castillo Hernández) and new (Kelly O’Connor, Richard Armendariz, Jenelle Esparza). When reached for comment, Arts & Culture Director Debbie Racca-Sittre explained, “We are proud that more than half of the participating artists in this exhibit are San Antonio artists who are helping tell the story of our city and showcase, through their works, the rich history and vibrant culture of San Antonio.”

Timed with the Convention Center and Hemisfair Park’s 50th anniversary, “Confluence” opens to the public in tandem with a temporary exhibition of HemisFair ’68 photographs and memorabilia. In anticipation of the big reveal, we slipped in for a preview during last week’s Distributech Conference and Exhibition. With roughly 15,000 electric, gas and water utilities professionals in attendance and artwork freshly installed across three floors, the viewing experience conjured the odd sensation of a scavenger hunt in a crowded airport. Below, a few highlights of what visitors can expect to see during the public opening and docent-led walking tours on February 1.

Ángel Rodríguez-Díaz, Reunion
Likely the first work visitors will encounter is the 2008 painting Reunion by unsung portrait master Ángel Rodríguez-Díaz. A native of Puerto Rico who relocated to San Antonio in 1995, Rodríguez-Díaz made one of his earliest local marks with the 1998 Artpace exhibition “A Splendid Little War” and was celebrated in 2017 with a retrospective hosted between Centro de Artes and FL!GHT Gallery. Visibly inspired by Mexican icon Frida Kahlo, Rodríguez-Díaz often employs self-portraiture as a vehicle for social commentary and has painted himself as famed luchador Rey Mysterio and the mythical chupacabra. Reunion presents the artist with a wry smile, donning a sombrero alongside a trio of birds and an ornate mirror reflecting jungle-like foliage.

Richard Armendariz, Forgive Me Pretty Darlin’
An El Paso native who moved to San Antonio in 1999, Richard Armendariz channels inspiration from Mexican-American traditions, the animal kingdom, mysticism and mythology into prints and paintings incorporating elements of woodcutting. Using a router, he carves into moody paintings on wood panels, giving them an illustrative quality with precise crosshatching. Evocative of a desert sunset and representative of his easily recognizable aesthetic, Armendariz’s 2017 piece Forgive Me Pretty Darlin’ depicts a running coyote — possibly in pursuit of prey — framed by a pattern of leaves and birds.

Jesse Treviño, Mi Vida
Born in Monterrey and raised in San Antonio, Jesse Treviño studied painting at New York’s Art Students League in the 1960s, got drafted into the Army in 1966 and lost his right hand as a result of an explosion during the Vietnam War. Following a two-year recovery period, Treviño taught himself to paint with this left hand and went on to brilliantly capture the spirit of San Antonio in photorealistic, slice-of-life paintings like 1976’s La Raspa, Los Camaradas del Barrio and Mis Hermanos (which resides in the Smithsonian American Art Museum). Possibly best recognized on a local level for his nine-story Spirit of Healing mural (at Christus Santa Rosa Children’s Hospital) and his mosaic mural La Veladora of Our Lady of Guadalupe (at the Guadalupe Cultural Arts Center), Treviño created something of a visual autobiography in Mi Vida, a 1972 painting (originally painted directly onto his bedroom wall) that layers symbolic imagery — a central female character, a hot rod, coffee and pan dulce, a pack of cigarettes, a pill, a can of Budweiser, a soldier carrying a gun, a prosthesis and a Purple Heart.

Mel Casas, Texano & Texas Fantasy
An El Paso native who adopted San Antonio as his home, late painter Mel Casas exhibited work in the 1975 Whitney Biennial, is represented in the Smithsonian American Art Museum and served as the first president of the seminal Chicano art collective Con Safo, but never received substantial accolades on a local level. Setting out to correct this oversight, Ruben Cordova organized a multi-venue San Antonio retrospective in 2015 that collected nearly all 150 of Casas’ Humanscapes — an epic series of large-scale paintings created between 1965 and 1989. Often spoofing or critiquing Southwestern stereotypes, politics and pop culture, his Humanscapes enter the Convention Center’s growing collection via No. 117 (Texano) and No. 118 (Texas Fantasy), which amusingly boil the Lone Star State down to mounted longhorns, cattle brands and a cowboy hat.

Ken Little, Victory and Defeat
Often challenging the confines of sculpture with a wink and a nod, Canyon-born artist Ken Little boasts the only floor piece in the new lot. Known and loved for everything from taxidermy mounts covered in shoes to larger-than-life garments plastered in dollar bills to conceptual neon signs to eclectic music projects, Little nods to the “successes and failures of each generation” with his 1997 sculpture Victory and Defeat. Amusingly installed near a window that looks out onto the Alamodome, the piece combines heavy metal (powder-coated cast iron) and simplistic, emoji-esque graphics (sad face, happy face) on a giant pair of hollow feet.

Gary Sweeney, The Story of Civilization
A California transplant who’s worked as a sign painter, a Playboy Mansion butler and an airline baggage handler (to the tune of 35 years), Gary Sweeney has embedded his humorous work in San Antonio’s artistic landscape through public art installations that oddly gravitate toward parking lots: a city-owned garage on St. Mary’s Street houses his shoe-centric, multi-level installation Walk This Way; the San Antonio International Airport’s garages are bordered by his postcard-inspired tourist spoof Nostalgia, Texas (HemisFair ’68? You’re Way Too Late); and his patchwork sign collage in the San Antonio Museum of Art’s parking lot is a popular spot for photo ops (“Art Is the Stored Honey of the Human Soul”). Like Kelly O’Connor’s In Real Life, Sweeney’s large-scale The Story of Civilization makes no attempt at blending in with its surroundings and is quite likely to become a destination for selfies of bored conventioneers. Created in 2003 and now spread across two walls at the top of an escalator, the pieces employs bits and pieces of commercial signage to spell out the first two paragraphs of Will and Ariel Durant’s 11-volume encyclopedia of Western history.

HemisFair ’68 Mini-Exhibit
A small but fascinating little capsule collection organized by curator Rigoberto Luna with guidance from archivists at the UTSA Libraries Special Collections and the McNay Art Museum, this temporary exhibition of digital prints on aluminum panels (on view through the end of the year) commemorates the 50th anniversary of HemisFair ’68, a World’s Fair then billed as “a six-month fiesta in honor of the city’s 250th year.” In addition to transforming the center of downtown with the Tower of the Americas, the State of Texas Pavilion (now the Institute of Texan Cultures), the Mexico Pavilion (now the Mexican Cultural Institute), a Fiesta Island with 18 different rides and a monorail connecting it all, the fair welcomed 33 nations, major corporations, cultural groups and performances — including a water ski show, the high-flying Voladores de Papantla and an adults-only puppet show presented by H.R. Pufnstuf creators Sid and Marty Krofft. 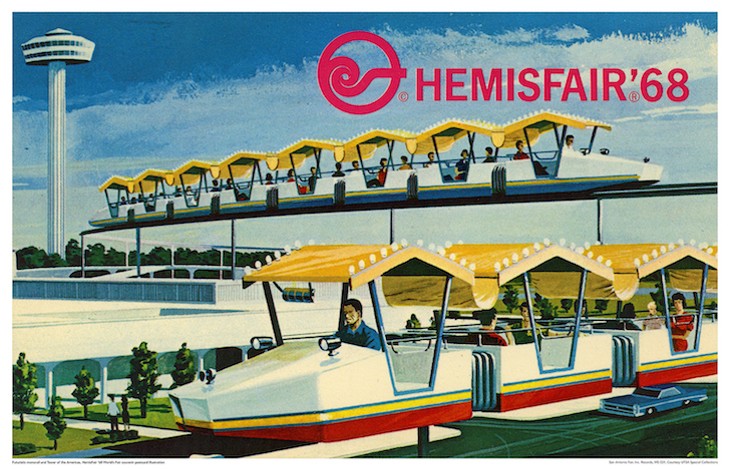 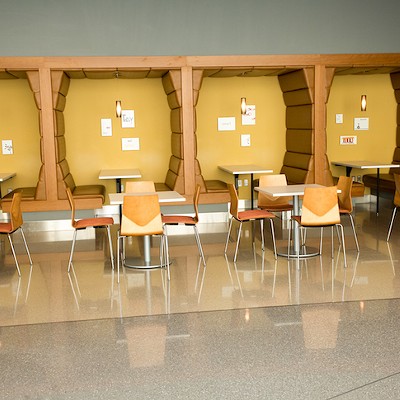 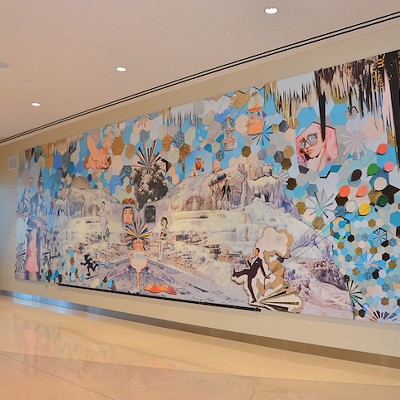 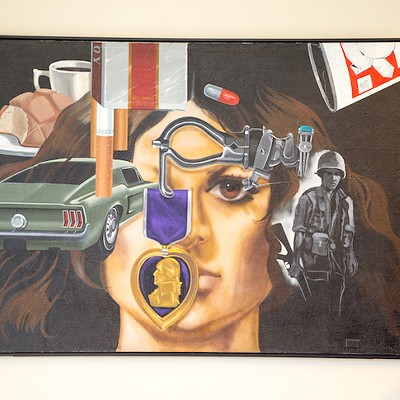 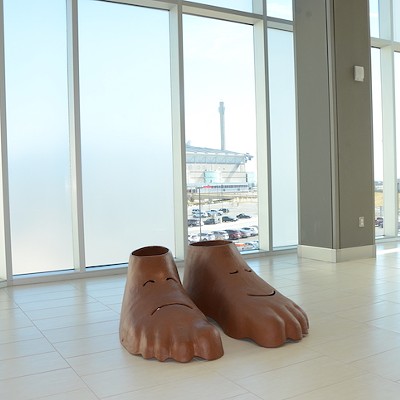 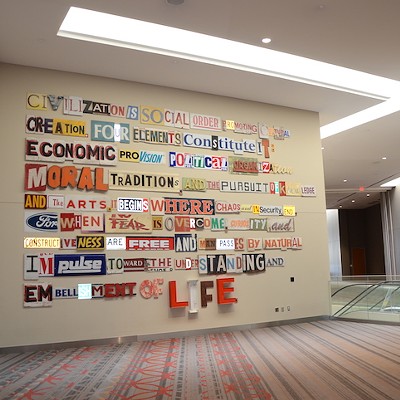 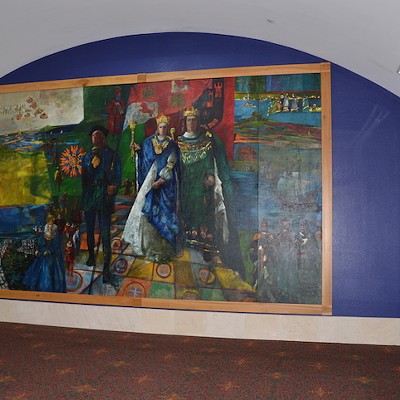