The McNay Art Museum has always housed arguably San Antonio’s finest collection of modern art and attracted damn fine visiting exhibitions to boot. But, over the past year and a half, owing in no small part to the bold, forward-thinking vision and useful connections of new (as of fall 2016) director Richard Aste, the McNay has really been on a roll.

In 2016, we loved “Miro: The Experience of Seeing,” “Picasso, Braque, and the Cubist Legacy: Prints and Drawings from the Collection,” and “Made in Germany: Contemporary Art from the Rubell Family Collection.” In 2017, we couldn’t get enough of “Revelations: Masterworks by African American Artists,” “Monet to Matisse: a Century of French Moderns,” “Juan Mora: Culture Clash,” and (especially) “Chuck Ramirez: All This and Heaven Too.”

Showing no signs of losing momentum, the museum is set to open no less than four compelling new exhibitions on Thursday, February 8 (all of which will run through May 6). 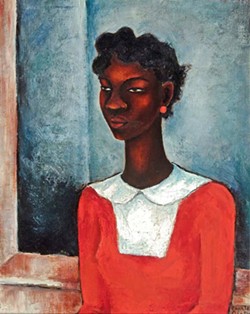 “Something to Say: The McNay Presents 100 Years of African American Art” marks the McNay’s first survey of modern and contemporary African American art. Encouraging a thoughtful consideration of the plurality of African American experience and expression, the exhibit (on view through May 6) represents the museum’s ongoing commitment to “equity, inclusion, and social consciousness as well as artistic excellence.”

“Haiti’s Revolution in Art: Jacob Lawrence Toussaint L’Ouverture Series” is a portfolio of stunningly powerful prints from the artist’s 41-panel exploration of the remarkable an undersung leader of the 18th century Haitian revolution, which drove out the French colonizers. Lawrence first learned of L’Ouverture while on a quest to discover new African American heroes, which he felt the history books and done a subpar job of providing him in school.