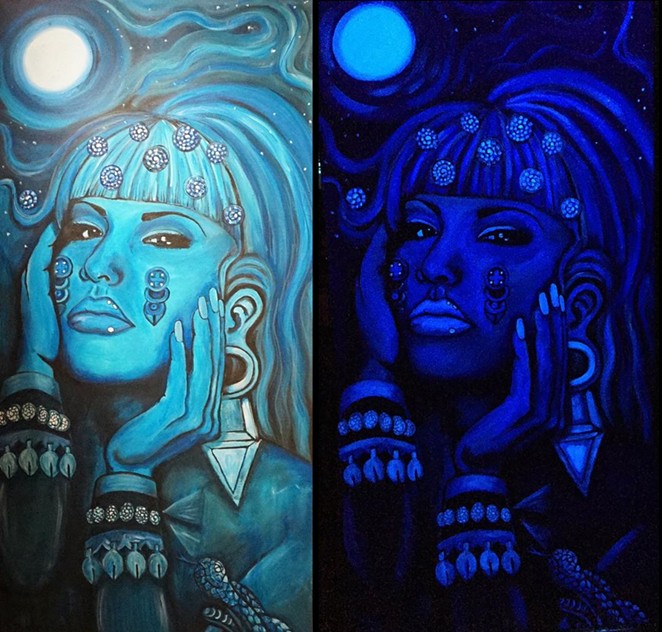 At “On and Off Fredericksburg Studio Tour” this weekend, you may want to take a second look at the “Selena as Kotolyxauki” painting by multimedia Xicana artist Debora Kuetzpal Vasquez.

In green-blue hues, decked out in full Mexica bling, Selena poses with her hands on her face looking not angry or sad, but simultaneously delicate and fierce.

For Kuetzpal Vasquez, the two entities represent empowerment, making it a natural fit to combine them.

Kotolyxauki (pronounced with the “yx” as “sh”) from the Mexica (i.e. Aztecs) has long been an important entity for Xicana feminists and for the study of the stars, Kuetzpal Vasquez said.

“She’s an organizer and the one that watches over women,” the artist said.

Similar to Kotolyxauk's philosophy, Selena represents cultural pride and a source of strength.

“She (Selena) is one of our brightest, brightest entities.”

“She was very young, vibrant, something sexy about her, and also very innocent,” she recalled.

In a male-dominated tejano music scene, Selena’s breakthrough and eventual crossover to mainstream music brought admiration, pride and made her a role model for many young women, Kuetzpal Vasquez said.

The Selena piece was initially unveiled at a P.E.A.C.E. (Putting an End to Abuse through Community Effort) fundraising event called “Como La Flor” in 2016.

Painted in luminous paint for viewing in black light, the piece transforms, taking a deep, spiritual aesthetic when viewed in its intended light.

A professor of color theory at Our Lady of Lake University, where she also is the visual arts department head, Kuetzpal Vasquez is immersed in the study of light and is interested in see how light plays with color and can affect the mood of a piece. “Without light you have no color,” she said.

The painting will be on display at Kuetzpal Vasquez's studio Corazones on Fire, a painting-as-entertainment art studio with a focus on expressions of culture with a Chicano studies, women studies and queer studies lens.

This Saturday there will also be a sneak peak of Kuetzpal Vasquez's upcoming work scheduled to be featured in Havana, Cuba in May. There will be a performance by Bianca Sapet, co-owner of Corazones on Fire, and singing from Giomara Bazaldua, who will dance with fire.
Get our top picks for the best events in San Antonio every Thursday morning. Sign up for our Events Newsletter.