The Houston Astros visited the White House on Monday morning as part of the team's historic World Series Championship.

Back in January, the Astros franchise released a statement saying they would accept President Donald Trump's invitation and, for the most part, stayed true to that statement.

Watch live as the World Series Champion #Astros are honored at the White House! https://t.co/GbC1QXSHKS

Most of the winning team took part in the visit, but short-stop Carlos Correa, a Puerto Rico native, and closer Ken Giles skipped out on the trip, according to the Houston Chronicle. The newspaper reports that the team said both players had family obligations.

During the visit, Trump commended the Astros and the "unbreakable spirit of the great State of Texas," according to the Chronicle. (Maybe that's why he just wished us "good luck" as Hurricane Harvey was barreling toward Texas last year?)

In addition to welcoming the World Series Champion Houston Astros to the White House, President Trump welcomed some of the heroes of Hurricane Harvey, including members of the incredible Cajun Navy. pic.twitter.com/o6TDG4eJ7u

Also missing was Carlos Beltran, who retired from baseball after the championship. According to the Chronicle, his absence wasn't a political statement, though he did say that he was disappointed in how the U.S. government responded to the hurricane devastation in his home country of Puerto Rico. 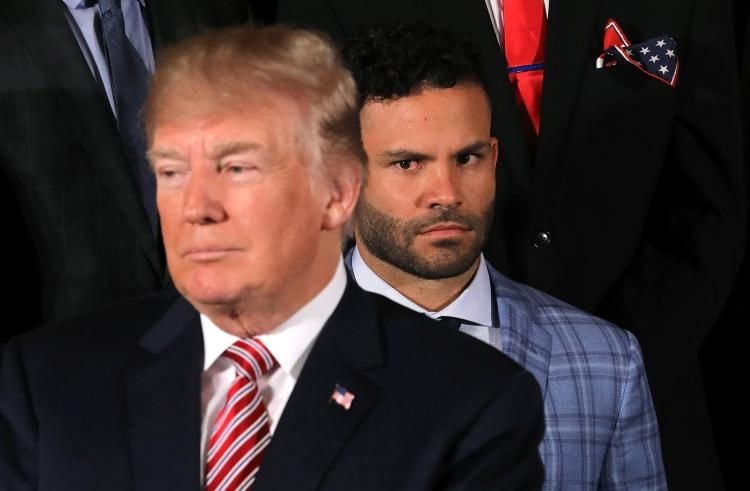 The Chronicle reports that the team invited Jim "Mattress Mack" McIngvale to join them at the White House. The Houston businessman allowed evacuees to stay in his furniture stores during Hurricane Harvey, gave a houseful of furniture away to 30 families, and "lost" a bet that refunded $10 million to customers because the Astros won the championship.