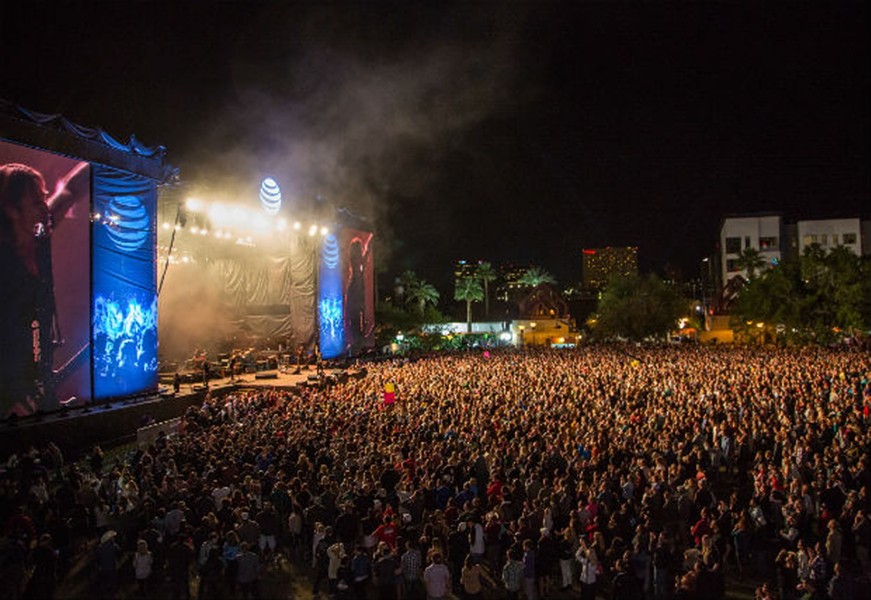 Maybe you’re a huge Kansas, Loyola, Michigan or Villanova fan, and you’ll remember the thrill of watching your team at the Alamodome, win or lose, for years to come. Or maybe you’re the person at the bar who doesn’t know a pick from a screen but wants in on the excitement and shouts, “Go, blue team!” when the spirit moves you.

Either way, you’ll have the same conundrum during the NCAA Men’s Final Four – deciding where to celebrate between the games on Saturday, March 31, and Monday night’s national championship match-up. To plan for your big basketball weekend, here’s our rundown of some of your best options.

March Madness Music Festival
Fri 3/30-Sun 4/1
Heavy hitting pop-rockers Maroon 5 and Imagine Dragon will headline respective concerts during the March Madness Music Festival. The three-day fest kicks off Friday, March 30, and runs through Sunday, April 1, which is Easter this year, at Hemisfair Park. On Friday, country artist Jason Aldean, who’s got a touch of R&B in his swagger, headlines with a pop country’s Kelsea Ballerini. Blowing up with their hit “Radioactive” back in 2012, Imagine Dragons is rocking the Coca-Cola Music bill on Saturday along with “Despacito” genius Luis Fonsi. On Sunday, 2000s pop icons Maroon 5 are slated to head the Capital One Jamfest bill with “Apologize” singers OneRepublic, pop punkers Panic! At The Disco, and Daya a pop singer who’s been garnering attention since her 2015 hit “Hide Away.” Free, Fri 4-10pm, Sat 2-10pm, Sun 3-10pm, Hemisfair Park, 434 S Alamo St, (210) 709-4750.

Reese’s Final Four Friday
Fri 3/30
For those who didn’t feel the need to snap up Final Four tickets, which brokers were selling for anywhere between $125 to $67,350 last time we checked, this event presented by chocolate giant Reese’s will give fans a free preview of Saturday’s semifinals. After open practice rounds from each of the Final Four teams, “special programming and tributes” and an autograph session, the day wraps up with a Reese’s College All-Star Game. Free, 10am-5:30pm, Alamodome, 100 Montana St., (210) 207-3663, ncaa.com.

Final Four Watch Party
Sat 3/31 + Mon 4/2
Dueling piano-bar Howl at the Moon is prepped to welcome up to 600 college hoops fans to watch the Final Four games on a monster-sized, 150-inch screen. Also, a cover band amenable to requests and specialty drinks created in honor of each team. Pro-tip: Take advantage of downtown haunt’s “bring your own food” policy and pick up some takeout to soak up the suds. Free, 11am-2am Sat, 2pm-2am Mon, Howl at the Moon, 111 W. Crockett St., Suite 201, (210) 212-4770, howlatthemoon.com/san-antonio.

Final Four Dribble
Sun 4/1
Open to ages 18 and under, this bouncy, March Madness parade expects to draw thousands of young fans as they dribble their way through the heart of the Alamo City. While limited onsite registration will be available the afternoon of the event, advance registration (ncaa.com/final-four/final-four-dribble) puts attendees one step closer to scoring an NCAA Dribble T-shirt, a basketball provided by Wilson and free entry to the Final Four Fan Fest. Free, 3pm, Institute of Texan Cultures, 801 E. César E. Chávez Blvd., (210) 458-2300, ncaa.com.

NABC Guardians of the Game Awards Show
Sun 4/1
An annual gathering timed with the NCAA Men’s Final Four, the NABC Convention is hailed as “the nation’s premier professional development and networking event for basketball coaches.” Open to non-conventioneers, Sunday’s NABC Guardians of the Game Awards Show is anchored by the presentation of awards (from Freshman of the Year to Big Man of the Year along with awards for advocacy, education and leadership) but also includes an onstage interview between both head coaches of the NCAA National Championship Game. $80, 6:30pm, Lila Cockrell Theatre, 900 E. Market St., (210) 207-8500, nabc.com.