Contemporary Art Month in San Antonio reached across the Atlantic Ocean to the Canary Islands, where some of the city’s earliest 18th-century settlers originated, and invited curator Adonay Bermúdez to re-colonize the city’s imagination by organizing a cross-cultural exchange for the Tricentennial’s CAM Perennial.

With three artists from the Canary Islands and three from San Antonio, “Beyond the Wall: Border Readings in a State of Emergency,” on view through May 6 at Artpace, takes on the thorniest issues of the Trump era — immigration, migration and borders, both real and imagined.

Putting the United States’ immigration “crisis” into perspective, PSJM (Canary Island artists Cynthia Viera and Pablo San José) built their own wall charting the migratory flows of almost Two Centuries of U.S. Immigration. Based on statistics gathered from 1820 to 2010, one side of the wall uses an enormous color-coded graph to show the relative size of various immigrant populations. Towering above all others during the most recent generations is the dark orange Mexican wave.

But on the opposite side, a similar mural-size graph compares immigration flows to the overall U.S. population. Northern Europeans from Great Britain, Ireland and Germany form blue Everest-like peaks, while the immigrant waves are reduced to mere ripples. 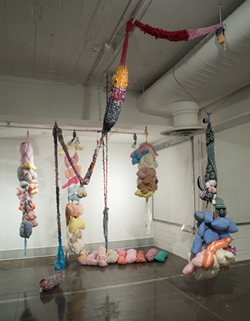 The North American Free Trade Agreement is being derided as unfair to U.S. business interests, but Canarian Luna Bengoechea contemplates the negative impact south of the border with a large mandala-like installation made with different hues of corn, similar to a Tibetan sand painting.

On the gallery floor, she laid out by hand individual kernels of yellow, white and blue corn to create a giant Mexican five-peso coin featuring the profile of the last Aztec emperor, Cuauhtémoc. Corn may be Latin America’s gift to the world, but it’s now cheaper to import it from the U.S., according to Bengoechea. The price of corn has fallen by 50 percent in Mexico, affecting more than 2.5 million Mexican peasants. Her title, Sin Maíz No Hay País/Without Corn, There Is No Country, references the Mexican movement that has been protesting NAFTA since 2007.

In the most complex installation, Everything Matters, the Canarian team of Francis Naranjo and Carmen Caballero employ photography, video and mixed media to explore the links between America and the Canary Islands, but the message is a little lost in translation. Photographs of a funeral are juxtaposed with creepy scenes of a science laboratory with the people’s eyes blacked out. A surgical clamp holds a band of gauze. An astronaut floats above the Earth while waves crash on a beach and rocky cliffs. The video shows a flag waving over a bleak island landscape that might as well be the moon.

Lacking any textural clues, you have to follow the visual cues, which contrast the scientific, industrial and institutionalized world with nature, spiritual longing and human mortality. The connections between the two hemispheres appear more metaphysical than tangible, but the artists invite us to “think about a new planet, perhaps outside our borders, where everything really matters again.”

San Antonio artist Ethel Shipton, who grew up between two worlds on the Texas/Mexico border, reveals the transient influence of clashing cultures by cutting English words out of the wooden seats of swings in Texas Swing/The Cross Roads. Light shining through the cutouts project the words “Best,” “Power” and “Unite” onto a street map with Spanish words: “Juntos,” “Pasando,” “Estamos” and “Aquí,” or “Together, passing, we are here.” While the Spanish words remain rooted, the English words swing back and forth without actually changing the underlying culture.

Born in Mexico and now based in San Antonio, Bárbara Miñarro stuffed corn and newspaper clippings into clothing from her grandmothers, her mother and herself to create colorful suspended sculptures that suggest stuffed animals. Looping over and around, symbolic of the interweaving of Mexico and the U.S., the corn represents something wanted versus the unwanted people who wear the clothes. Land of Corn, Sister Land embodies the contradictory feelings of the U.S., which tends to like the products of Mexico, from tacos to tequila, but disdains its citizens.

Originally from Venezuela, San Antonio artist Hayfer Brea shows that all borders can be considered imaginary, or at least artificial political constructs, with An Imaginary Line, a video of the words in Spanish, “Una Linea Imaginaria,” floating in the water off the coast of Venezuela. Whether the line is the border between Earth and sky or between two countries, it only exists in our minds.

Both San Antonio and the Canary Islands are located at about the same latitude and both can be considered cosmopolitan frontier crossroads where imperialistic forces have collided, commingled and co-existed. “Beyond the Wall” examines the harsh reality of borders and wonders if the world would be better off without them.