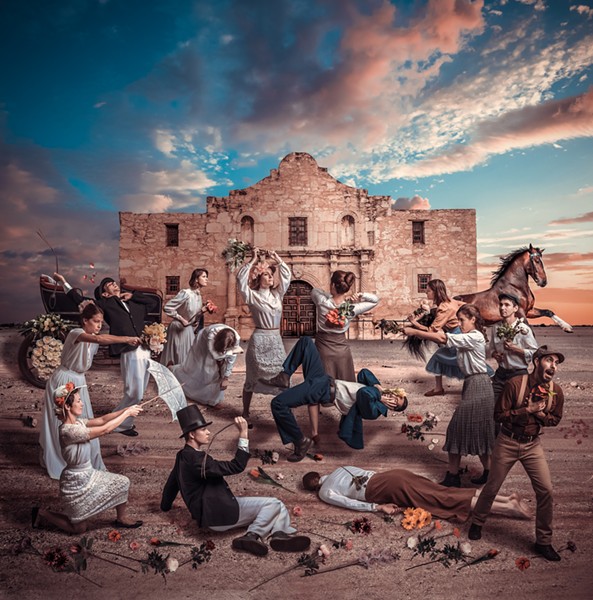 By celebrating contemporary artists in meticulously crafted and insightful documentary shorts, married duo Mark and Angela Walley have established themselves as revered creators in their own right. Beyond creating films about the work and creative processes of Gary Sweeney, Megan Harrison, Ken Little and many others, the pair has been spotlighted by local, regional and international platforms ranging from Glasstire and The Atlantic to National Geographic and Smithsonian Magazine. This year, the Walleys premiered Tía Chuck, a feature-length documentary on the life and work of late local artist Chuck Ramirez (save the date for the premiere on May 5 at the Tobin Center for the Performing Arts) and were also among the artists invited to participate in “Common Currents,” a Tricentennial exhibition series designed to creatively explore 300 years of San Antonio history. Assigned to the year 1891, the pair dove into the history of the Battle of Flowers Parade and then staged a stylized, historical reenactment — photographing seven of their friends (several of whom appear in the image as multiple characters) as participants in the peculiar event that launched Fiesta.

When you received 1891 as your assigned year, did you immediately know your piece would be about the Battle of Flowers Parade?
Angela Walley: We immediately did an online search and were so excited to discover Fiesta San Antonio started in 1891 with the first Battle of Flowers Parade. We were very fortunate to receive such a significant year in San Antonio’s history, but also felt pressure to create a work of art that lived up to that history.

Did you learn anything unusual about the origins of the Battle of Flowers?
MW: The majority of the literature you’ll find will discuss how Fiesta began as a parade of decorated horse-drawn carriages to honor fallen soldiers of the Alamo and the Battle of San Jacinto. The story typically ends with something like, “The first Battle of Flowers Parade in 1891 was considered a great success that quickly became a city institution.” But I discovered a newspaper article from 1891 published in the San Antonio Daily Light that describes a chaotic display of social disorderliness which unfolded after the parade entered Alamo Plaza. The procession was meant to end with a mock flower battle where participants could pelt each other — as well as bystanders — with flowers. The article describes a fight that waged for nearly an hour between the elite parade participants and the massive crowd of 15,000. Flowers were torn from carriages; a buggy was overturned and horses ran loose into the crowd; a fist fight broke out, leading to the arrest of two men; and carriage whips and umbrellas were used for defense on the crowd. The article so vividly described the scene that we were inspired to visually tell that story.

Did your piece take any stylistic cues from Robert Jenkins Onderdonk’s 1903 painting Fall of the Alamo?
MW: We knew we wanted to work in photography as our medium and create an image that portrayed the “social disorderliness” side of the story, but we needed another component to tie it together. We wanted to make a connection to the Alamo as both the site of the famous battle and also the location of the first Battle of Flowers Parade, so we researched imagery that had been created about the Battle of the Alamo. When we saw Onderdonk’s iconic painting, we knew it would be an incredible image to recreate. The dynamics between the Texian defenders and the Mexican army perfectly aligned with the elite-versus-the-crowd story we wanted to tell. We replaced the weapons with flowers and recast Davy Crockett as Ellen Maury Slayden, [one of the organizers of the first] Battle of Flowers Parade.

Since most folks know you as filmmakers, what can you share about working in still photography and the challenges of staging a shot this complex?
AW: We recently completed our debut feature-length documentary film, Tia Chuck: A Portrait of Chuck Ramirez, and a very significant component to making that film was staging recreations that represent significant moments in Chuck’s life. So cinematic recreations have been on our mind, but we’d never pulled off anything with this many characters for video. Compositing photographs gave us the opportunity to create a much more dynamic image than would have been possible in video.

723 S. Brazos St.
San Antonio, TX
(210) 271-3151
General Services, Community and Art Gallery
Map
Get our top picks for the best events in San Antonio every Thursday morning. Sign up for our Events Newsletter.