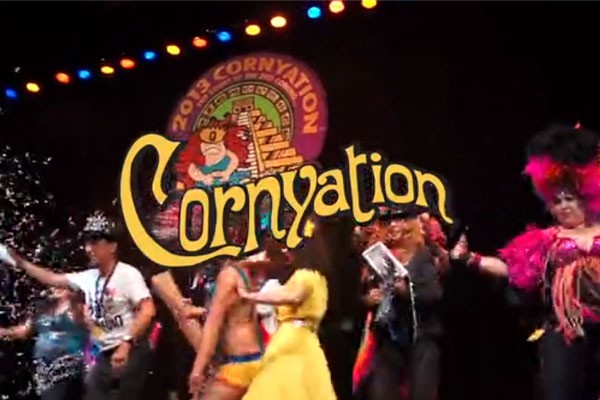 Cornyation, the Short Film, which was completed last September, chronicles the origins of the bawdy stage show and it’s roots in the community. It features interviews with founder Ray Chavez and members of the Cornyation family including past and present Kings Anchovy. The film received a premier screening on March 25 at Brick at Blue Star.

Sims says the short film sparked his interest in creating a full-length feature.

“After directing the short film last year I felt like 20 minutes wasn’t enough to fully do justice to the history of Cornyation and the Cornyation community,” Sims said in a statement to Out In SA. “We’re proud of the short film, but excited to really unpack the Cornyation story and profile the dedication of many of the artists, entrepreneurs and truly passionate and talented individuals that work tirelessly to pull Cornyation off year after year.”

Sims, who was born in the UK, has been making films since he was 11 years old. He attended the London Film School and worked in Johannesburg developing programming and documentaries for the South African Broadcasting Corporation.

In San Antonio, Sims co-founded Astrobleme Films & Davis Sims Media with Crissy Rivas who serves as producer for the company.

Since starting the business, Sims has shot four feature films, scores of short films and over 50 commercials. His film, #prayfor, which is available on Shorts TV, earned him the 2017 award for Best Filmmaker at the San Antonio Film Festival. Another of his films, Cavern, was part of the 2016 Cannes Film Festival Short Film Corner.

This week, Sims and his team are getting ready to capture new footage when Cornyation’s 2018 edition, The Court Of Frenetic Frantic Kingdoms, hits the stage on April 24 for three nights and six performances. “We’re flying by the seats of our pants right now with just over 24 hours until showtime,” Rivas told Out In SA in an email.

For Sims and Rivas, the goal of the Cornyation documentaries is to shed light on a group of creative and dedicated San Antonians who, over the years, have helped raised nearly $3 million for organizations like the San Antonio AIDS Foundation and BEAT AIDS.

“Everyone knows that Cornyation is one of the hottest Fiesta tickets,” says Rivas. “I’d attended Cornyation for many years and felt it was time to remind the community that while Cornyation is definitely a wild and raucous good time, they’re raising serious money to contribute to local HIV-AIDS non-profits.”