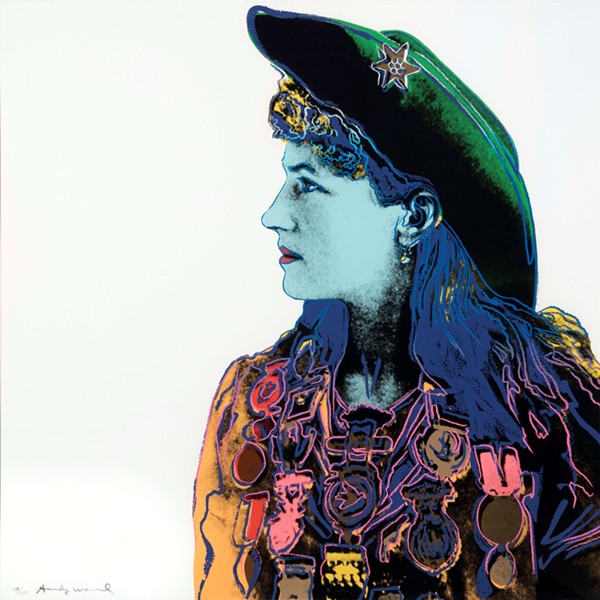 Beyond the iconic Campbell’s soup cans, Brillo boxes and portraits of the rich and famous, pop pioneer Andy Warhol created numerous portfolios meant to stand on their own — including the drag and trans portraits “Ladies and Gentlemen,” the controversial “Ten Portraits of Jews of the 20th Century” (which The Philadelphia Inquirer pegged as “Jewploitation”) and “Cowboys and Indians,” which comes to light this week at the Briscoe Western Art Museum.

Far from politically correct even by the standards of the ignorant ’80s, the series takes an irreverent, Hollywoodian approach to redefining icons such as Apache chief Geronimo, sharpshooting folk hero Annie Oakley (pictured) and Civil War cavalry commander General Custer — not to mention kachina dolls and a buffalo (aka Indian head) nickel.

Described by Warhol specialist Revolver Gallery as both an “ahistorical representation” and an “ironic commentary on America’s collective mythology of the historic West,” the portfolio meets its match in San Antonio via “Myth of the West,” a retrospective featuring 26 cinematic paintings by Billy Schenk, a New Mexico-based rancher and pop artist who’s been dubbed the “Warhol of the West.” The Briscoe’s opening weekend programming includes a book signing with Schenk (11am-1pm Sat May 26) and Nostalgia Unbound: Songs About the West, a concert brought to life by pianist/vocalist Alan Jones and vocalist and Cindy Miller (2pm Sat May 26).