Would Kawhi Leonard Rather Sit Out Another Season Than Play with the Spurs Again? 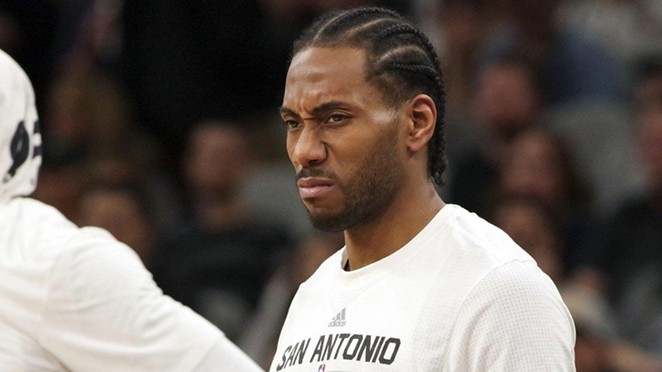 Following the announcement that LeBron James is trading camps once again to join the Los Angeles Lakers, NBA commentator Stephen A. Smith spoke about the move, and the Spurs' own Kawhi Leonard got thrown into the mix.

During a Sunday night segment, Smith revealed that league executives have told him that Leonard is willing to sit out the 2018-2019 season in order to get to the Lakers.

That scenario is indeed very possible since DATE reports claimed that Leonard said he would never step foot into the Spurs locker room ever again. Still, sitting out another season is a dramatic move no matter how strained the Leonard-Spurs relationship may be.

“If he employed that method, it would be highly unprofessional, incredibly unfair, and just trifling on the part of Kawhi Leonard,” Smith said.

It's still up in the air since Smith later added that he hadn't heard any such buzz from Leonard or his camp. However, if Leonard were to try to skip out on the Spurs for another season, he'd have trouble doing so. The *CBA has rules that protect teams in cases that players don't want to ball up on the court.

While Leonard was injured for most of the 2017-2018 season, it'd be a different case in the fall, about a year-and-a-half after his injury.

“The basic message to me has been rule out nothing with Kawhi Leonard if San Antonio is not going to let him out of there,” Smith said.

As of now, Leonard reportedly still wants out, but the Spurs franchise aren't rushing to make that happen. Let's see how much longer this novela can be dragged on.

*This story has been updated to clarify CBA. The Current apologizes for this error.