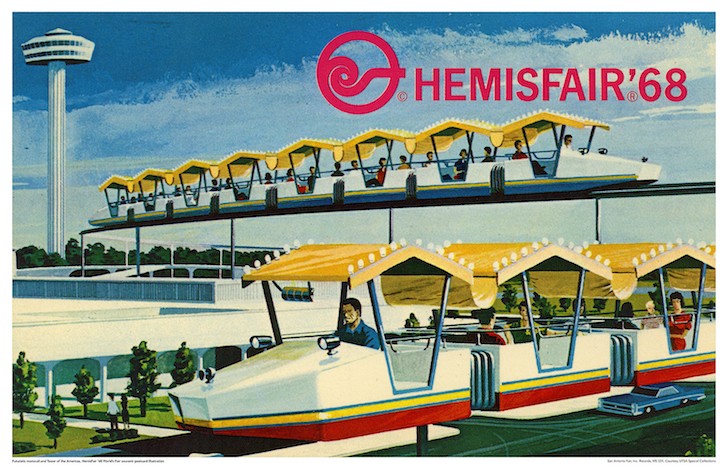 For many of us, Hemisfair is not a memorable event but a place — an urban park with a newfangled playground and such storied structures as the Tower of the Americas. But for locals of a certain age, still-evolving Hemisfair Park is tied to memories of the 1968 World’s Fair, which brought 33 exhibiting “nations” (from Japan and Switzerland to Texas and Arkansas) and a host of corporations (IBM, Eastman Kodak, Coca-Cola and Pearl Brewing Company among them) to the Alamo City for a six-month extravaganza following a theme of “Confluence of Civilizations in the Americas.”

A good percentage of these old-schoolers will also recall a darker side of fair that involved the city employing eminent domain to snap up a church and 19th-century homes, many of which were destroyed to make way for pavilions and the 750-foot tower. Speaking to the Current earlier this year, Hemisfair Communications Manager Drew Hicks explained that “there were literally people that had to be dragged out of their homes … It’s a story that our city, collectively, we’ve not been super comfortable talking about, and as we’ve gone through the development of Hemisfair, I think that it’s critical that we tell the story of that time.”

Organized in observance of the fair’s 50th anniversary, the conversation promises insights from moderator Sherry Kafka Wagner (a writer and urban planner who donated her covetable book collection to the library at Hotel Emma) and panelists George Cisneros (co-founder/music and media director of URBAN-15), Richard Rosen (founder of the Magik Theatre, which is housed in a former concert hall that got transformed into the Laterna Magika for HemisFair ’68) and Lonn Taylor (a writer, curator and historian who worked for the Smithsonian Institution’s National Museum of American History for 20 years).