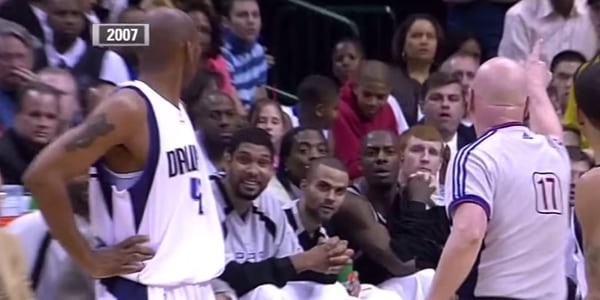 Most San Antonians remember the time Tim Duncan was ejected from a game. In fact, it was the only time he got ejected in his 19-year career.

While San Antonians were both puzzled and amused, the referee who made the call, the strict, quick-tempered Joey Crawford, was not.

In an ESPN article published Thursday, senior writer Jackie MacMullan looked at "the life of an NBA ref" and included the now-retired Crawford. He shared that the bizarre run-in with Duncan was actually a pivotal moment in his life.

Here's a refresher. Duncan, who was sitting on the bench during a regular season game against the Dallas Mavericks in 2007, started laughing.
"I threw him. That laugh bothered me," Crawford told ESPN. "I thought it was incredibly disrespectful. I knew the minute it happened I was gonna be in trouble."

Duncan received a technical foul, which made him laugh even more. Crawford not only ejected Duncan from the game but also challenged the Spur to a fist-fight. While Duncan was being escorted off the court, coach Gregg Popovich, as he always does, began arguing with the ref.

When David Stern, who was the NBA Commissioner at the time, got wind of the incident, he ordered Crawford to take care of his mental health.

"[The suspension] was a big deal. It really shook me," Crawford said. "That's when I realized, 'I gotta do something about this.' I had to talk to a professional to help me deal with all the anger."

Stern fined Duncan $25,000 for verbal abuse of an official and suspended Crawford for the remainder of the season. The longtime referee thought his career was over. But he started seeing a psychiatrist and was able to return to the court for almost another decade. He retired in 2016 after nearly 40 years.