San Antonio Spurs' Dejounte Murray: A Rising Star on the Court – and YouTube 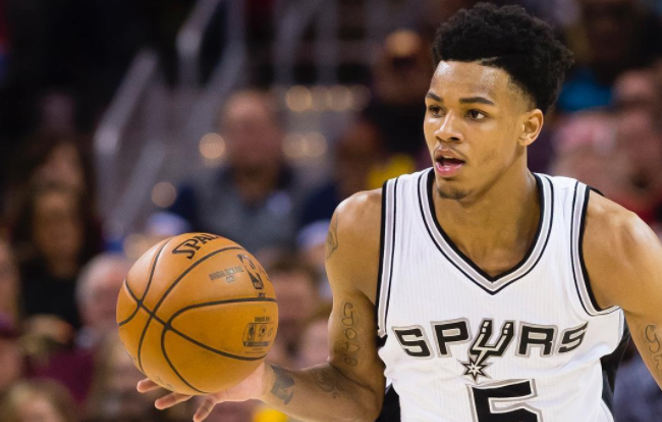 Earlier this week, the San Antonio Spurs tipped off a new era at training camp where for the first time since 1997, none of the Big Three – Tim Duncan, Manu Ginobili or Tony Parker – were on the roster. At Media Day on Monday, Coach Gregg Popovich described the scene as “a little bit melancholy” before embracing the challenge of a fresh season.

“[It’s] a great opportunity for a new challenge and new energy, a different route, a different perspective,” Popovich said. “Seeing all the new faces that we have to try to put together will make it a interesting and, as I said, challenging year, but in a good way.”

Parker signed a two-year, $10 million deal with the Charlotte Hornets over the summer, placing San Antonio’s offense squarely in the hands of Dejounte Murray, who became the permanent starting point guard last season. Murray averaged a solid 8 points, 5 rebounds and 2 assists per game while emerging as an elite talent on defense. At just 21 years of age, he became the youngest player in NBA history named to an All-Defensive Team, capturing All-Defensive Second Team honors.

Let’s Rock And Roll, You Either On This Side Or The Other Side!! #Year3🏀 #GoSpursGo🤫 pic.twitter.com/Lg0qxGlwVl

During the off-season, Murray worked to improve his jump shot with San Antonio’s renowned shot whisperer Chip Engelland. After some minor tweaks to his shooting form, Murray launched jumper after jumper over the summer. Talking to the media, he acknowledged that a consistent mid-range shot could
be instrumental in unlocking his offensive game.

“I feel like I got a lot of things I gotta work on, that I’ve been working on,” Murray said. “Obviously, if you can shoot in this league, knock down a mid-range, a three here and there, then it can take you a long way, especially with the other things I’m capable of doing.”

Off the court, Murray recently let his guard down via a YouTube channel launched with girlfriend Jilly Anais, an aspiring R&B singer. Dejounte and Jilly debuted on August 20 and has since garnered over 2,530,646 total views, with 118K subscribers. A straightforward glimpse into a young relationship, Murray lauded the endeavor for helping him to “open up,” after reminding reporters that his focus remains “110%” on basketball.

NBA pundits have already pegged Murray as an early candidate for next season’s Most Improved Player Award. Paired with perennial All-Star DeMar , the duo represent a promising backcourt intent on crafting a legacy of their own in San Antonio.