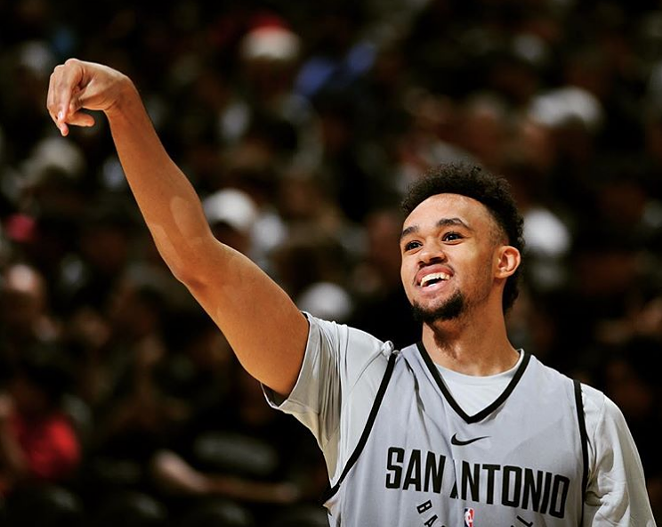 For the second season in a row, adversity arrived early for Coach Gregg Popovich and the Spurs. After losing promising young guards Dejounte Murray and Lonnie Walker IV to injury in consecutive preseason games, San Antonio tipped off the Derrick White era on Wednesday night in Atlanta.

Heading into the contest, reports surfaced that the Spurs had no plans to bolster their backcourt via free agency or trade, inserting White into the starting lineup against the Hawks. The second-year guard displayed confidence at the point, finishing the night with 15 points, 6 rebounds, 3 assists and 2 blocks in a close 127-130 loss.

The defeat marked the 17th straight road loss for the Spurs, dating back to last season when San Antonio compiled a losing road record for the first time in Popovich’s storied tenure. With LaMarcus Aldridge enjoying a night off, there were plenty of shots to go around, and DeMar DeRozan, Bryn Forbes, Pau Gasol, Rudy Gay, and Marco Belinelli all scored in double figures.

As will likely be the case for the foreseeable future, Murray’s presence was primarily missed on the defensive end. After trading away two premier perimeter defenders, and losing an All-Defensive Second Team talent to injury, San Antonio’s team defense will be tested in their quest to reach the playoffs for the 22nd consecutive season.

“We gotta move on,” said backup point guard Patty Mills after practice earlier this week. “The start of the season, preseason, and going onto this road trip is still a focus for us to still get better as a team. So, adversity in the camp for us but hopefully this makes us stronger as a team.”

The Spurs will close out their woeful preseason on Friday night against Jonathon Simmons and the Magic. With the Juice Crew reserve unit of recent memory currently scattered across the league, expect Mills and the revamped Foreign Legion to receive extended minutes in Orlando.