FOR-EV-ER Squints: Actor Chauncey Leopardi on Hitting a Home Run with The Sandlot 25 Years Ago

In 1993, a family classic was born when actor Chauncey Leopardi and eight other tween boys stepped onto a baseball field in The Sandlot. Leopardi played the scene-stealing Michael “Squints” Palledorous, a bespectacled kid with a talent for storytelling and a huge crush on swimming pool lifeguard Wendy Peffercorn. Celebrating The Sandlot’s 25th anniversary, Leopardi and some of the original cast will be in attendance at Alamo City Comic Con this weekend.

The Current caught up with Leopardi, 37, earlier this month to talk about reuniting with the cast, Squints' glasses and his famous stolen kiss scene.

Is it more special when a larger group of cast members are able to attend a convention like ACCC together?
Definitely — the more the merrier. Any time we get to stop what we’re doing in our normal lives and come together to hang out is great. It’s like getting together with family. We’ve gotten together a lot more lately since the film continues to pick up speed as time goes on and gets even more popular.

How old are your kids and have they seen the film before?
I have a 16-year-old daughter who saw it when she was five or six. I also have a two year old and a three month old, and they actually watched it a couple of days ago. Their mom sent me a picture of them with their grandma sitting on the couch watching it. I think they were into it, so that’s good.

What was that day like for you when you shot the kissing scene at the pool?
I was an 11-year-old kid, so I’m sure I was anxious and excited and nervous and had all types of feelings.

Sandlot director David Evans told me a few years ago that, in real life, you were a “little player” on set.
Hey, if the shoe fits, wear it. I guess my character ended up turning out like that at the end. 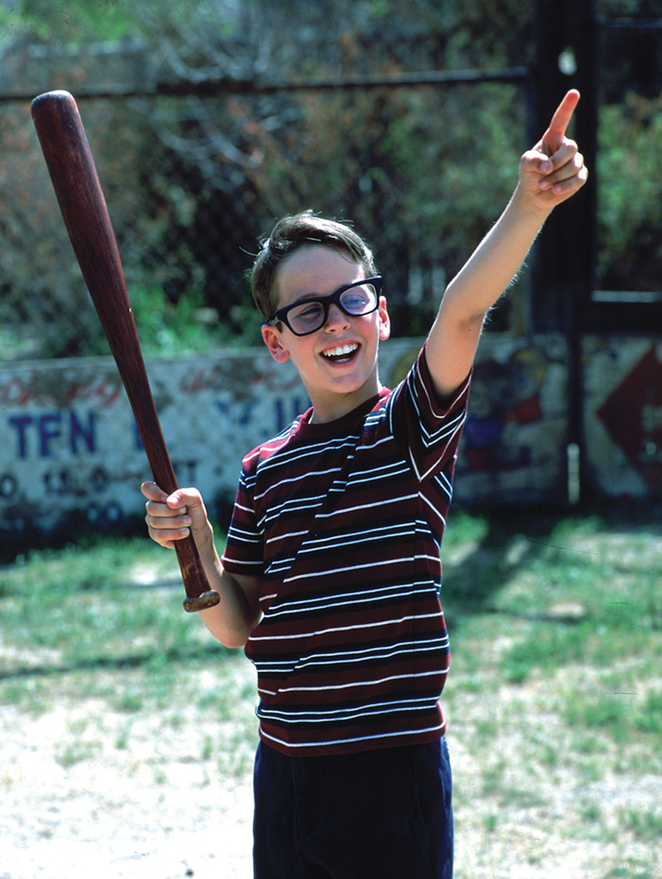 Is there anything you wish you would’ve kept from the film? David says he has Squint’s original glasses.
I wish I had those [glasses]. I would do anything for them. One day, he’s going to leave them to me — maybe. He can hang onto them for now.

What do you tell people who say your stolen kiss scene shouldn’t be viewed as sweet and innocent, especially now in the #metoo era?
It should be behavior that is frowned upon at any time. But I think the movie was very wholesome even though it was kind of risqué. Obviously, it’s not what you want to teach your children, but it wasn’t meant to be creepy in any way either.