As marijuana continues to squirm its way into the (legal) mainstream, creative outfits like the fashion design duo Dawson+Hellmann have emerged as playful champions of cannabis culture. The brainchild of San Antonio-based Sonya Dawson and LA-based Analise Hellmann, the luxury bedding and loungewear line has recently added ultra-casual menswear to the mix in the form of pajama pants printed in a “Pot Toile” design that comes in both Yves Klein Blue and a grayish hue aptly dubbed “Smoke.” $95, dawsonhellmann.com.

As avid Current readers may recall, Blue Star Coloring blipped our radar as both an example of a promising local upstart and a successful player in the adult coloring-book scene that found major traction in 2015. Now headquartered in Oregon and rebranded as Blue Star Press, the company has expanded its scope to include artsy coffee-table books and quirky games — such as author Mike Alfaro’s Millennial Lotería ($22), which includes 46 ironically reimagined cards, 10 boards, 80 bitcoin tokens and a collectible pin. Initially launched as an Instagram account in 2017, Alfaro’s concept aims to “update lotería to be more representative of Hispanic-Americans, their diversity and their accomplishments.” $22, Feliz Modern, 110 W. Olmos Drive, (210) 622-8364, felizmodern.com.

As part of its Distinguished Lecture Series, the McNay recently welcomed one of the founding members of the Guerrilla Girls — a feminist/activist group that first presented itself as the “Conscience of the Art World” while publicly (and often humorously) embarrassing galleries and museums based on their abysmal efforts to showcase or promote the work of women artists. Residuals from the sold-out event can fortunately still be found in the well-stocked museum store in the form of coffee mugs ($22), bandanas ($18), zippered pouches outlining “The Advantages of Being a Woman Artist” ($28) and totes that double as gorilla masks ($30). $22-$30, McNay Art Museum, 6000 N. New Braunfels Ave., (210) 824-5368, mcnayart.org. 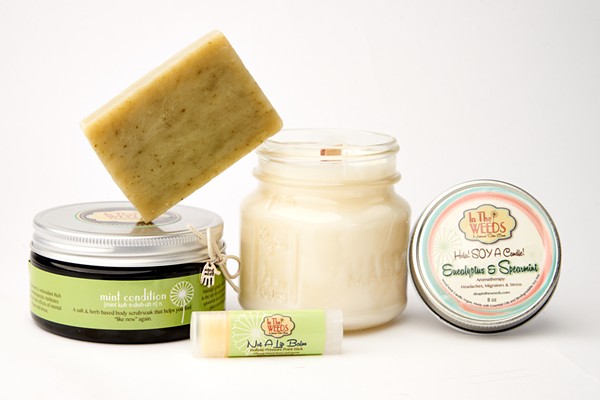 In the Weeds Natural Skincare Products
On the website for her product line In the Weeds Natural Skincare, entrepreneurial McAllen transplant Lika Torline makes use of a quote from late American poet James Russell Lowell: “A weed is no more than a flower in disguise.” As optimistic as that might sound to a gardener, it’s fitting for her homegrown creations, which sprang from humble beginnings and are proudly chemical- and cruelty-free. Although known best for an “exfoliant/mask/light moisturizer” known as Dollface ($30), In the Weeds boasts an array of salves, soaps and scrubs, and also bundles complementary wares into giftable bundles like Bit of Everything ($95), Herb & Mint ($42) and a new Headache and Stress Relief Box that includes a soy candle, a salt soak, Eucalyptus-scented soap and a headache pressure point stick ($55). $30-$95, shopintheweeds.com.

Lost Films Horror Anthology
Since setting up shop in 2012, Perpetual Motion Machine Publishing has emerged as one of the key publishers keeping horror fiction alive. Based in Schertz and operated by Max Booth III and Lori Michelle, the DIY outfit releases between five and eight books each year along with issues of the fiction magazine Moon Digest and anthologies such as the “technological horror” collection Lost Films. Combining the talents of 19 authors, Lost Films spins cinematic yarns in which “a deranged group of lunatics hold an annual film festival, the lost series finale of The Simpsons corrupts a young boy’s sanity, and a VCR threatens to destroy reality.” $18.95, perpetualpublishing.com.

Since its formation in 2002, Trinity Press has emerged as an important literary and artistic voice in San Antonio while releasing upward of 100 titles that aim to uphold Trinity University’s commitment to educate for “the personal, lifelong quest for understanding of oneself and one’s place in the world.” Specializing in five core categories — Nature and the Environment; The Writer’s World; Literary Works; Regional Books; and Architecture and Landscape — the forward-thinking publisher is behind the hyper-local books Humans of San Antonio (a street-photography project by Michael Cirlos) and 300 Years of San Antonio & Bexar County (which combines the voices of various authors to shed light on “the iconic stories, moments, people, and places that define one of the oldest communities in the United States) and the forthcoming Rollergirls (offering a historical look into flat-track derby with photographs by Felicia Graham). Although available via Amazon and Barnes & Noble, we recommend you keep your dollars close to home by purchasing these titles from The Twig Book Shop, Feliz Modern, the San Antonio Museum of Art, Curio at Hotel Emma or Kathleen Sommers. $24.95-$32.50, tupress.org.

While we traditionally include an Artpace membership ($60 and up) on our annual list of gift ideas for art lovers — and that’s always an excellent option — the beloved contemporary art space boasts a compact gift shop that’s stocked with homespun T-shirts, conceptual jewelry and other artist-made treasures. Among the goodies up for grab this holiday season is local art star Cruz Ortiz’s whimsical suite of San Antonio Travel posters depicting Mission de Valero (aka The Alamo), Mission Espada, Mission Concepción, Mission San Juan and Mission San José in his signature style. As Executive Director Riley Robinson pointed out, 100 percent of proceeds benefit Artpace and its programming. $200, Artpace, 445 N. Main Ave., (210) 212-4900, artpace.org.

30 Poems for the Tricentennial Chapbook

Representing a collaboration between literary arts organization Gemini Ink and San Antonio’s Department of Arts and Culture, this Tricentennial-themed chapbook pairs poems and artwork exploring six key timeframes in San Antonio’s history: the Pre-Columbian era or Yanaguana (prior to 1718), the Spanish Colonial Period (1718-1809), Mexican era (1810-1836), Texas Nation era (1836-1846), San Antonio: Crossroads City (1846-1946), and Modern Times (1947-2017). A thoughtful companion to the exhibition of the same name (on view through April 25, 2019 at Culture Commons Gallery), 30 Poems for the Tricentennial is a no-brainer for the artists and poets in your life, plus it’s free. Free, Culture Commons Gallery, 115 Plaza de Armas, (210) 206-2787, getcreativesanantonio.com.

Winner of the second season of Project Runway All Stars, San Antonio-based fashion designer Anthony Ryan Auld is possibly best known for a dress he crafted from bird seed on the ninth season of Project Runway. Although his Alamo Heights shop Couleur + Blindé carries his own line of womenswear and smartly curated complements, his vegan soaps and long-lasting soy candles make for crowd-pleasing gifts in scents like cedar, patchouli and blackberry sage. Fashionistas in the crowd should also keep an eye on Auld’s forthcoming debut as a contestant on the final season of Project Runway All Stars (premieres January 2 on Lifetime), which features winners from both the U.S. and foreign versions of the reality competition series. $7-$26, Couleur + Blindé, 4704 Broadway, (210) 480-1807, couleurblinde.com.

Discovered on one of our visits to Henley’s Gentlemen’s Grooming, the San Antonio-bred beard-care line Outlaws & Gents covers both the rustic and refined ends of the spectrum with chemical-free oils in four signature scents (Lumberjack, Diesel Blend, Orange Crush, Coffee Cream and Mocha Mint) and conditioning balms designed with “The Saint” and “The Sinner” in mind. Since all the small-batch, hand-blended products are comprised of 100-percent natural ingredients, they’re also completely safe and gentle on the skin of that bearded beauty in your life — whether he’s been naughty or nice. Henley’s Gentlemen’s Grooming, 14510 NW Military Hwy., Suite 103, (210) 592-1945, henleysmensgrooming.com.