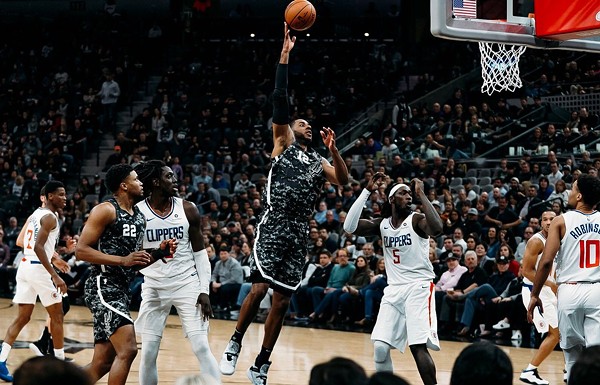 The San Antonio Spurs honored the memory Dr. Martin Luther King Jr. on Sunday Night at the AT&T Center, before succumbing to the Los Angles Clippers 103-95. Prior to tipoff, Patty Mills welcomed the crowd, recounting the team’s visit to the site of King’s assassination in 1968.

“Our team recently had the opportunity to go to the National Civil Rights Museum at the Lorraine Motel in Memphis, Tennessee, to further our knowledge about the histories of this country and the significant events that occurred which had a major impact on people all throughout our world,” said Mills. “As a member of the Spurs organization, we are honored and proud to celebrate tonight the legacies of the Rev. Dr. Martin Luther King Jr. in hopes that we can continue to educate about the past so that we can all move forward together as one.”

With his direct connect to Mabo Day and the struggle for Indigenous land rights in Australia, Mills was the ideal candidate to address the crowd. In a campaign cluttered with backcourt injuries, Mills has been a constant for the Spurs, appearing in every game this season. Against the Clippers on Sunday, he finished the night with six points, three rebounds, and two assists, but as Coach Gregg Popovich recently reminded, Mills’ contributions transcend statistics.

“He’s having a wonderful season,” Popovich said. “He’s a huge energizer off the bench. He knows what we want to get done out there. He’s really selfless and a great teammate. Exudes a lot of wisdom for everybody else, so he’s really important for continuing the fabric of what we’ve had in the past.”

In a contest seemingly mired in the slog of the NBA schedule, continuity would have certainly benefited the Spurs. Aside from a 30-point, 14-rebound effort from LaMarcus Aldridge, San Antonio appeared listless against a team missing two of its leading scorers. After the game, Coach Pop lamented another missed opportunity for the Spurs.

“We’ve all seen it many times in the NBA,” Popovich said. “It’s one of the mysteries, where it always seems like that team that comes up and plays well, and the team that has everyone, kind of loses a little bit of emotion, or juice, or whatever you want to call it. I think they out-executed us and out-competed us tonight, in every way, shape and form, and we were sloppy on top of it — and that’s a bad combination.”