When reviewing the career of Tanzanian-born, London-based architect Sir David Adjaye, it begins to make perfect sense that he studied art before finding his calling in architecture. Born in 1966 to Ghanian parents, he traveled extensively during his childhood, living in Ghana, Lebanon, Saudi Arabia and Egypt before arriving in London in the 1970s. As a student at London’s Royal College of Art, he ran with would-be stars Chris Ofili, Jake and Dinos Chapman, Tim Noble, Sue Webster and others who would soon fall under the influential umbrella of 1990s-era Young British Artists (YBA), several of

Making his first waves in London’s then-gritty East End, Adjaye designed houses and studios for Ofili as well as fashion photographer Juergen Teller and actor Ewan McGregor. Possibly the most publicized of Adjaye’s early projects is the Dirty House he completed in collaboration with Noble and Webster in 2002. Painted a dark color reportedly inspired by Adjaye’s skin, the structure makes a powerful statement with mirrored windows and a seemingly floating cantilevered roof. Despite its slightly ominous appearance from the street (Webster has described it as a “fortress”), the interior of the Dirty House is light and airy, combining elegant, gallery-like living quarters on the second floor and a spacious ground-level art studio.

Adjaye’s increasingly visible profile on London’s East End led to a commission to create two “Idea Stores” — structures designed to re-envision public libraries for contemporary audiences amid waning attendance. Inspired in part by the multicultural neighborhood and market that surrounds it, Adjaye’s blue-and-green striped glass Idea Store in Whitechapel placed his striking aesthetics and socially driven design sense on a larger stage when it was nominated for a Royal Institute of British Architects Stirling Prize in 2006. 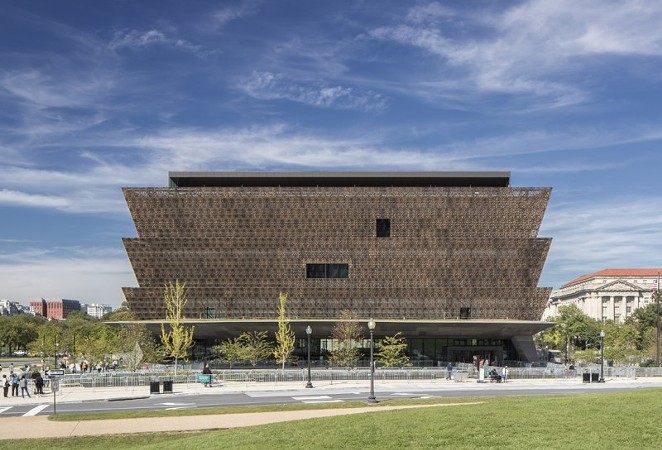 Having designed everything from low-income housing in Harlem and flood-resistant homes in New Orleans to the Moscow School of Management and the Nobel Peace Center in Oslo, Norway, Adjaye often favors commonplace materials (including concrete, plaster and glass) and draws consistent inspiration from the overlooked aesthetics of urban Africa. Furthering his global profile as a bonafide “starchitect,” he made international headlines with his shimmering, bronze addition to the National Mall in Washington, D.C. — the Smithsonian National Museum of African American History and Culture, which has been described as a “major turning point” in architecture and earned the esteemed Beazley Design of the Year award in 2017.

Lucky for local art and architecture enthusiasts, Adjaye’s out-of-the-box ideas and deep understanding of contemporary art are already in play at Ruby City, a forthcoming art space designed to house the sprawling collection of late local philanthropist, artist and Artpace founder Linda Pace. Inspired by Pace’s drawings of sparkling red buildings she envisioned in her dreams, Ruby City nods to its fantastical name with exterior concrete panels “imbued with a rich red hue composed of minerals and glass glistening in the sunlight.”

Recently counted among Architectural Digest’s list of the 14 Most Anticipated Buildings of 2019, Adjaye’s first-ever project in Texas comes to light this week when the knighted architect and Order of the British Empire honoree visits San Antonio for a free lecture at Trinity’s Laurie Auditorium. Titled “Ruby City: A Lecture With Sir David Adjaye,” the talk promises to cover both his collaboration with Pace and the creative process behind the contemporary art space, which is set to open to the public in October 2019.
Get our top picks for the best events in San Antonio every Thursday morning. Sign up for our Events Newsletter.