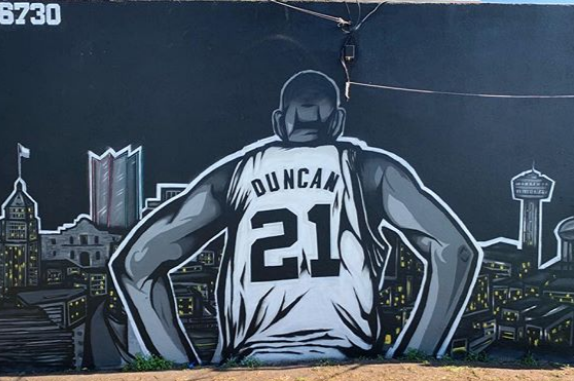 Spurs faithful may want to make a pilgrimage to the South Side in the coming days to take a picture next to a new mural honoring legend Tim Duncan.

Joining numerous murals dedicated to Old Man Riverwalk, local artist Alex James is finishing up a new mural addition at Countdown City Cuts, located at 6730 S. Flores St. Part of an extended project at the barber shop, James said it felt right to start with Duncan because "he was our base, like Pop always said."

Almost finished with the new Mural at the shop.. Had fun reminiscing with everyone about all the greatness Duncan brought to our city.. Great way to start the year! Appreciate all the homies at the shop that put the real work in everyday! 🙏🏽 6730 S Flores #countdowncitycuts #TimDuncan #Loyalty #spurs #Spursnation #ThankyouTD #SaMurals #Southside #Ekosr

The mural replaces the Kawhi Leonard tribute James debuted in fall 2017. On the heels of the fallout between the now-departed Leonard and the Spurs franchise, James added the slash over Leonard's head with a jab at the player's infamous Uncle Dennis.

James said rather than include another up-and-coming player and risk repainting again, he picked Duncan as a safe bet. He told KSAT the new mural also will include other Spurs greats who played major roles in securing the team's five championships.