Last spring, the inaugural San Antonio Pop Con drew more than 2,100 people.
While that may pale in comparison to the tens of thousands drawn by pop-culture conventions like Alamo City Comic Con, it outstripped the expectations of the San Antonio Public Library, which organized the event as a new way to engage with the public.

On the strength of that success, Pop Con will return February 16, transforming the first three floors of the Central Library into a full-on geek fest, featuring panels and presentations by artists, actors, comic book creators and best-selling authors, plus the expected array of gaming areas, cosplay, contests and kids’ activities.

“It’s a way for the library to reach out to the community in a slightly different way. We’re not just offering books or job searches,” said Rhonda Woolhouse, the show’s organizer and a librarian for the City. “We’re offering something really fun. People can bond over shared interests.”

While the first Pop Con drew heavily on local and regional talent, organizers this year cast a wider net.

At first glance, Pop Con may resemble Alamo City Comic Con or any number of pop culture conventions that have popped up around the country in recent years. But its guests point to some key differences.

First, it’s free. That puts it in contrast to many cons that charge not only a hefty admission price but add-on fees for meet-and-greets, photo ops and autographs with guests. At Pop Con, guests will largely be accessible to fans, often selling their own books or prints and presiding over presentations where they answer questions about their work. 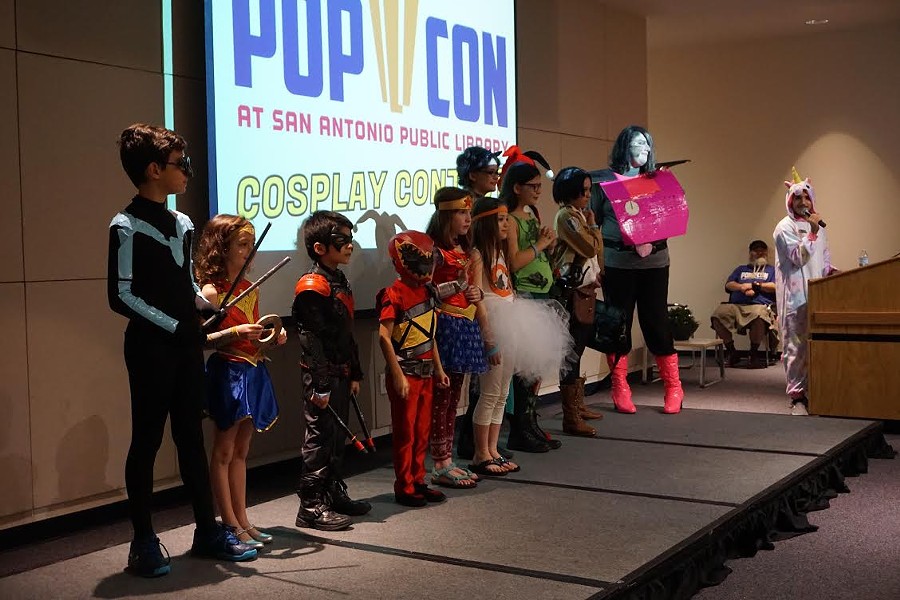 A second difference is that Pop Con is primarily focused on the people who dream up and develop the pop culture it celebrates as opposed to conventions where the primary attraction is getting to shake hands with TV and movie celebrities.

“This is an event focused on the creators, the people who are the storytellers,” said John Picacio, a San Antonio-based illustrator who’s returning for his second Pop Con. “The organizers have a good grasp of how to pull talent from the local area that will turn some heads.”

Picacio, who’s worked on myriad science fiction books and projects, including the Game of Thrones franchise, expects to be hawking and signing his own wares — not to mention answering plenty of questions from fans.

“I’m looking forward to chatting with old fans and making new ones,” said Drayden, returning for her second Pop Con. “I’ll have tons of swag on hand and chances to win free books.”

Canadian urban fantasy writer Armstrong, author of the popular Women of the Otherworld series, the basis for the SyFy series Bitten, said the library setting is part of the excitement.

“I’ve long wanted to visit San Antonio, and the chance to combine that with a library con is irresistible,” she added.

Similarly, Kentucky-based Manchess, author and artist of the acclaimed picture-book Above the Timberline, said he’s thrilled about the potential for interaction not just with potential fans but fellow readers.

“I’m a reader and a fan of books my entire life, so getting invited to share this with another audience is very special for me,” said Manchess, whose art also appeared in the Coen Brothers film The Ballad of Buster Scruggs.