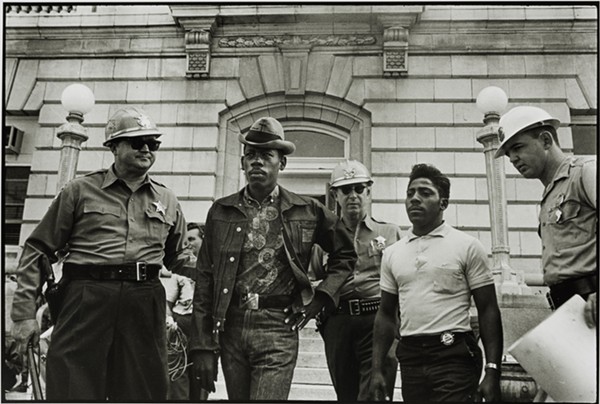 Nodding with its title to iconic French lensman and Magnum Photos founding member Henri Cartier-Bresson and his principle of harnessing “the decisive moment,” the San Antonio Museum of Art’s new exhibition “Capturing the Moment” brings together 77 images created by 23 photographers working between the 1920s and the 1980s.

Assembled largely but not exclusively from a recent gift of more than 850 photographs collected by Marie Brenner and Ernest Pomerantz, it offers a broad, organic look at the evolution of photography and the world at large. Organized into three thematic chapters — Landscapes & Cityscapes, People & Portraits and War & Conflict — the mainly black-and-white collection importantly illustrates the early 20th-century arrival of lightweight, hand-held 35-millimeter cameras and how they served as game-changers for clandestine street photographers, photojournalists and early

chroniclers of the everyday.

Although there are some recognizable stars in the bunch — including documentary hero Dorothea Lange’s haunting, 1936 icon Migrant Mother, Nipomo, California and landscape master Ansel Adams’ 1960 image Moon and Half Dome, Yosemite — they mesh seamlessly into a storyline that pulls viewers into the dust storms of the Depression era, the grim realities of WWII, the front lines of the civil right movement, motorcycle clubs, living rooms, honky-tonks and the gritty corners of New York City’s Times Square.

Organized by Suzanne Weaver (SAMA’s Brown Foundation Curator of Modern and Contemporary Art) with support from assistant curator Lana Meador, “Capturing the Moment” also bridges gaps between still photography, film and video in five compact screening rooms where visitors can sit for a spell and take in Henry Horenstein’s 2014 love letter to Austin dance hall the Broken Spoke, Leonard Freed’s 1993 short following drag performer Joey Arias to New York’s infamous Wigstock festival or Cartier-Bresson himself shedding light on the creative process. During a walkthrough of the exhibition, Weaver and Meador explained that “Capturing the Moment” is essentially the tip of the iceberg as the Marie Brenner and Ernest Pomerantz Collection has brought SAMA a sharpened focus on photography that’s certain to inform future exhibitions.