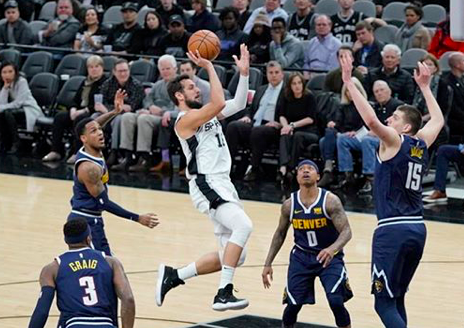 On a frigid night in San Antonio, the Spurs closed out a three-game homestand with a tight 104-103 win against the Denver Nuggets, for the team's third consecutive victory.

The Nets' cold start matched the weather outside the AT&T Center, with the Spurs scoring 36 points in the first quarter to Denver’s 17.

A resurgent Demar DeRozan led the way for San Antonio with a complete game, contributing 24 points, 7 assists, 6 rebounds and 3 steals. Derrick White continued as the team’s unexpected catalyst with 11 points, 9 assists, 4 rebounds and 3 blocks of his own.

After a fourth quarter surge from the Nuggets, the game came down to the wire with the Spurs relying on their often-maligned defense to deny Denver’s final three field-goal attempts and secure a win. Prior to the contest, Coach Gregg Popovich presciently addressed the improved effort on the defensive end.

“We call it activity,” Popovich said. “We want more activity from more people. Get involved, don’t be a spectator, make it difficult. That has done well for us the last few games. Rather than follow people around, we want them to react to our defense and our activity. If you do that well, you probably will create a few more turnovers.”

With 17 games remaining on the regular season schedule, San Antonio currently sits at 8th place in a crowded Western Conference race. Following the most woeful Rodeo Road Trip in recent memory, the Spurs return to the road for a Wednesday night showdown against the Hawks in Atlanta. Forward Rudy Gay acknowledged the team’s recent struggles away from home.

“We’re all pros,” Gay said. “We know exactly what we need to do. We came back home. We regrouped, and now we have to take that on the road.”

With a loss against the lowly New York Knicks already on their record, the Spurs can ill afford another miscue against an inferior opponent, whether in an opposing arena or at home. Avoiding another first-round matchup against the Golden State Warriors should provide plenty of motivation as the Spurs approach their playoff push.