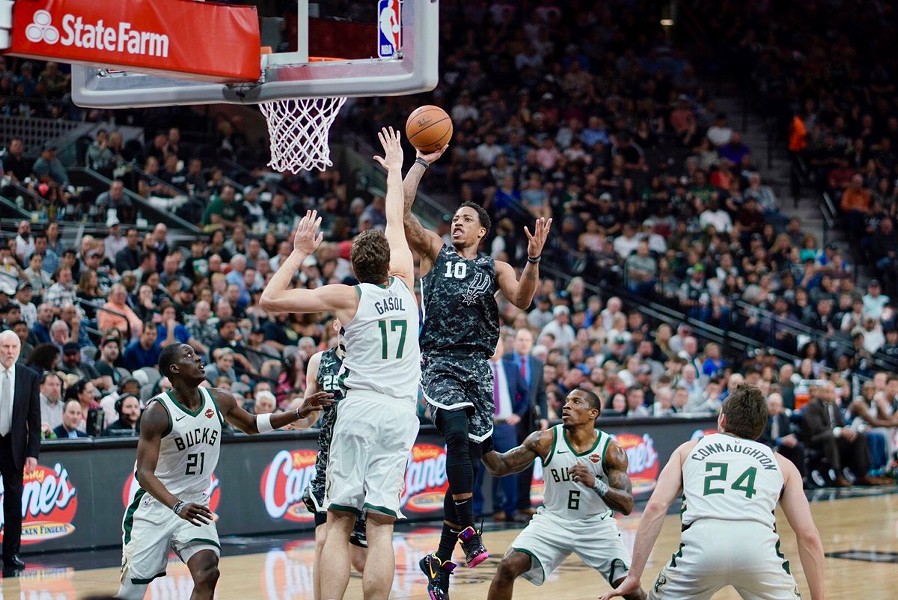 Heading into Sunday night’s 121-114 win against the Milwaukee Bucks, the Spurs were focused on containing league MVP candidate Giannis Antetokounmpo. In their previous matchup, a close loss for the Spurs in Milwaukee, the Greek Freak went off for 34 points.

“Show him a crowd,” said Derrick White describing his team’s strategy for slowing down Antetokounmpo. “One-on-one, he’s tough. So whoever’s on him, you gotta help him out. Show him a crowd and try to keep him out of the paint.”

“They’re the best team in the league right now,” White added. “Offensively, defensively. Best record. So it’s going to be a good challenge for us. We got to step up and meet the challenge.”

Following a surprising tribute video for Pau Gasol that included highlights of his stint with the Los Angeles Lakers, San Antonio initially didn't look up to Bucks' challenge. Trailing by 7 after one quarter it was the Spurs, not the Milwaukee, who resembled the team on the second night of a back-to-back.

After a second quarter spark from Patty Mills off the bench, San Antonio leaned heavily on the LaMarcus Aldridge-DeMar DeRozan tandem that finished the night with a combined 57 points. The surge continued throughout the second half with Mills and Marco Belinelli each contributing 16 points and Bryn Forbes adding 12 of his own.

The Spurs ultimately held Antetokounmpo to 27 points, which proved just enough to propel them to their fifth consecutive victory. Coach Gregg Popovich matter-of-factly addressed the team’s inconsistencies after the game.

“Probably part of the answer is we haven’t been together long enough, either in the system or the players with each other, to form habits and be consistent in those areas,” Popovich said. “So it hasn’t become a habit yet. The culture hasn’t sunk in definitively enough to have that consistency. We’ve been used to that for a long time. It’s good to see that it’s there in spurts, which makes me feel like we can get it together as time goes on.”

With a four game homestand looming on the horizon, and only 15 games remaining on the schedule, Popovich and his charges continue to build momentum.

“Definitely good to get on a little winning streak here, especially after the rodeo,” White said. “So we just try to keep building on it. And try to build on each game.”