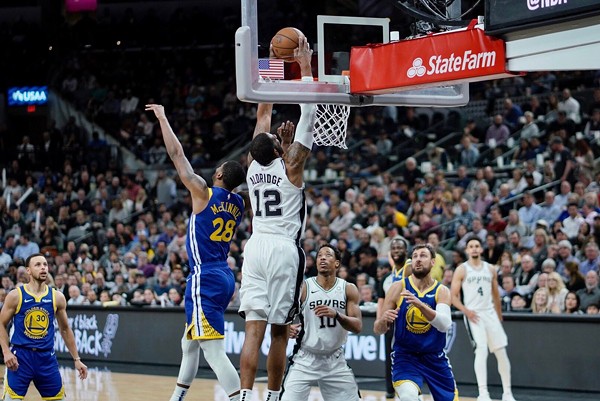 The San Antonio Spurs extended their season high winning streak to nine games on Monday night at the AT&T Center, with a determined 111-105 victory over the Golden State Warriors.

DeMar DeRozan and LaMarcus Aldridge combined for 49 points to pace the Spurs, but it was a collective effort on the defensive end of the floor that fueled the win against the defending champs.

Since putting the Rodeo Road Trip in the rear view mirror, the Spurs rank second in defensive efficiency at 103.1 points allowed per 100 possessions. Gunner Bryn Forbes addressed the team’s defense before the game.

“I think that’s the one thing that does kind of help raise our confidence, or whatever it may be: the defensive end,” Forbes said at shootaround. “Because the offensive end hasn’t been the problem all season. It’s just been staying consistent on defense, bringing the effort every night, and I think we’ve done that as of recently, so I’m pretty excited to get this one started.”

From the jump, the Spurs defense looked up to the task, limiting Kevin Durant, Klay Thompson and Stephen Curry to a combined 11 first quarter points. After Curry’s 61-footer silenced the crowd to close out the quarter, San Antonio responded with steady doses of Aldridge and Rudy Gay, taking a 58-47 lead at halftime.

The Spurs weathered the storm in the second half, making key stops to suppress a patented Death Star surge from the Warriors. DeRozan essentially closed out the game in crunch time, nailing a tough turnaround jumper with Thompson draped over him.

“Sometimes they just don’t go in, but that wasn’t really the story of the game,” Warriors coach Steve Kerr said. “I just felt like we got outplayed. It’s the hottest team in the league. [They are] obviously really well coached, and they’re executing, and I thought they out-executed us, out-coached us, and they deserved to win.”

The Spurs are now fifth in the Western Conference standings with 11 games remaining on the regular season schedule. With the dog days of the NBA schedule approaching, San Antonio looks intent on improving, as opposed to watching the scoreboard as teams jockey for playoff position.

“We’re just trying to do all the right things right now,” said Forbes. “All the scoreboard [watching], and all that stuff, it doesn’t really matter. If we do what we’re supposed to do, we usually get the outcome we want. Almost always, so that’s what we’re trying to focus on.”