Commentary: Behind the Scenes at Cornyation, Fiesta’s ‘Black Sheep’ Event

Editor’s note: San Antonio Heron reporter Gaige Davila is a Fiesta newbie. This is his impression of Cornyation.

“Have you ever been down there?” Ray Chavez, Cornyation co-founder, asks me and the photographer. He had just strapped us with wristbands, and checked us off “the list.” I said no, telling Chavez the last time I was at the Majestic Theatre was for a Lewis Black show. He laughed, told me good luck, and to go wherever I wished.

“Down there” were the dressing rooms for both the Empire and Majestic theaters, a hallway labyrinth covered in hand-painted show posters and signatures from current and past performers, lying below the stage. It was 45 minutes until showtime and performers were getting ready, walking in and out of dressing rooms in full costume, full makeup, or no costumes, no clothing, no makeup, and so on.

Fiesta Cornyation is deemed the “black sheep” of Fiesta, says Mindy Miller Hill, who is this year’s King Anchovy (LIV, to be exact), after 10 years of performing in the show. She’ll be presiding over the 15 skits—eight before intermission and six after, for two shows a night for three nights—representing the Court of the A-corn on a throne made from a bell cart, an allusion to Hill’s director of destination sales position at the JW Marriott San Antonio Hill Country Resort & Spa.

Each of the performances satirizes current local, state, national and international events on stage. I figured that. When I walked backstage, I was greeted by cardboard cutout of Supreme Court Justice Brett Kavanaugh being burned at the stake.

Each group designs their own costumes and writes their own music for their skit, raising money to fund their performance through sponsorships. All the performers are volunteers.

Fiesta Cornyation is a nonprofit charitable organization, too, donating money to the San Antonio AIDS Foundation (SAAF), Beat AIDS (Black Effort Against the Threat of AIDS), and Thrive Youth Center, a center for homeless LGBTQ youth. The show dates back to 1951 as a spoof of the Coronation of the Queen of The Order of the Alamo, the annual high-class pageant of Fiesta royalty.

The skits “are very easy to identify with, if you watch the news at all,” Hill said.

Back to the Kavanaugh cutout: Rick Gipprich, co-designer for Gipprich-Garcia, are performing the “I Hope They Serve Beer in Hell” skit, satirizing the Brett Kavanaugh hearings with the House Judiciary Committee, in the theme of “American Horror Story: Coven,” with Queen Ruth Bader Ginsburg burning Kavanaugh at the stake. The performance focuses less on the accusations against the Supreme Court justice and more about female empowerment.

“This is more about empowering women to take a stand and to come together as women,” Gipprich said. “And Ruth Bader Ginsburg is the shit. Why not make her a queen?” 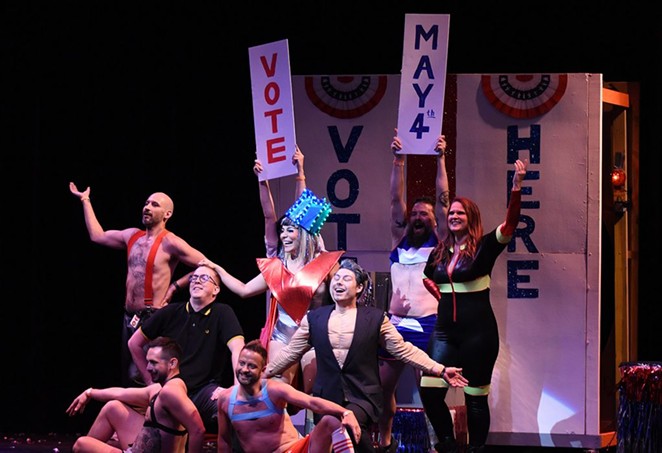 The performance is modeled like a pageant, Ashley Smith, who’s performing in the skit, explained, where each “contestant” comes out and is judged slash interviewed.

“We’re going to be doing the interviews for city manager that you never saw,” Smith said, commenting on the city’s closed-door interviews for Sculley replacement.

The four baboons that escaped the Texas Biomedical Research Institute last April made it into this year’s Cornyation, too.

“The Duchess of the Primate Prison Break” will chronicle the baboons’ journey from the research center to downtown San Antonio, climbing to the top of the Tower of the Americas. The group, Orange is the New Baboon, have been working on the skit, which will also satirize “Orange is the New Black” and “Prison Break,” since February.

Ines Visconti is in this group, and it’s her first year performing in Cornyation. She says she wanted to participate because of the show’s support of San Antonio’s HIV/AIDS organizations, and the scholarship program, awarded to four students interested in creative arts annually.

“It’s just a great way to give back to the community and help people as well,” Visconti said. “That’s really why I’m doing it. And (the group is) so much fun.”

Dominique Gonzales-Kinkaid, who’s been performing in Cornyation skits for the last 10 years, said she tells herself every year she won’t perform again, but always finds herself back on stage. She says the dedication and camaraderie of the performers keep her in Cornyation.

“So many people donate their time to do all of this,” Gonzales-Kinkaid said. “This takes months and months of preparation for just four minutes (on stage).”

I recognized the camaraderie, too, as my photographer, Jack Myer, and I were welcomed into this maze, with performers in varying stages of undress, as if we had been walking these halls with them every year, and we were all part of one large theater company.

Hill called Cornyation the “edgiest” Fiesta event, but I’m calling it the most honest with itself. There’s no judgment towards anyone that doesn’t deserve it, and the performers’ self-awareness to the absurdity of it all is much more truthful than any other Fiesta event I’ve seen.