San Antonio artist Gene Elder who had a long career as an artist, writer, activist and most recently as the archivist at the Happy Foundation, died on April 28 at the age of 69 after a months-long battle with cancer.

Elder revealed his cancer diagnosis to his friends in an email last September and kept an upbeat tone in subsequent messages. On February 13, he sent what would be his final email saying he was entering hospice care. He bade farewell, saying with his customary ironic humor, “A good guest knows when it is time to leave the party.” His email included a photo, which is shown here at top of this page.

During the early 1970’s Elder was manager and part owner with Arthur “Hap” Veltman of the San Antonio Country, a popular gay disco at the time. In 1984, he was crowned Cornyation’s King Anchovy presiding over the Court of Wretched Excess. In 2014, he became a contributor to Out In SA with his Chartreuse Couch interviews of local artists. 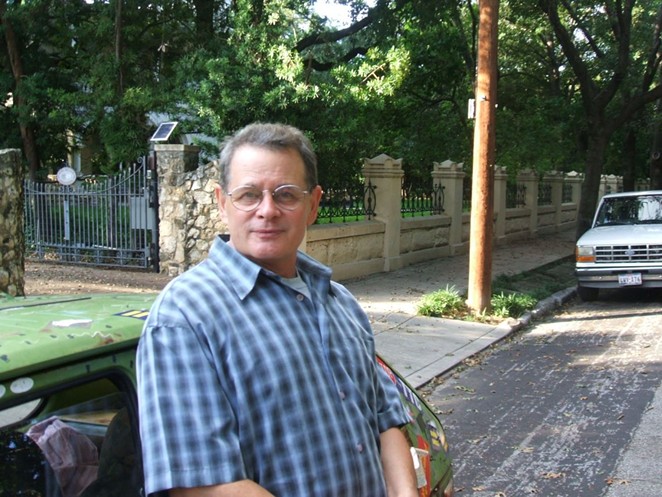 In 2014, Elder added his journals to the UTSA Libraries Special Collections which has a section dedicated to local LGBTQ history. An introduction on the UTSA Archives website offers the following biographical information about his life:


Gene Elder was born to Billie and James M. Elder on July 4, 1949 in Dallas, Texas. In the 1970s, Elder attended Trinity University in San Antonio where he earned his Bachelor of Fine Arts degree.

While at Trinity, Elder met San Antonio business entrepreneur Arthur “Hap” Veltman who became Elder’s colleague and friend and played an instrumental role in the trajectory of Elder’s life.

In 1973 Gene went to work for Veltman who was the silent owner of the San Antonio Country, one of the largest gay discos in the United States. During his management of the disco, Elder squared off against the military who moved to make the San Antonio Country off-limits. Elder’s encounter with the military’s infringement on gay rights intensified his commitment to activism.

In the 1980s, Elder’s association with Veltman continued. Gene Elder managed Blue Star Art Complex which Veltman and business associate, Bernard Lifshutz had purchased in 1985. When Veltman passed away in 1988, Elder became the director of the Happy Foundation Archives housed in the Bonham Exchange night club and named for Hap Veltman. The Happy Foundation serves as a repository for local, regional, and national GLBT history.

Elder’s commitment to the preservation of queer history is underpinned by his activist inclinations, a trait he displayed early on. This trait is often manifest in Elder’s artistic expression through original artwork, exhibits, written work, and performance pieces.

Elder’s drive to merge art and activism compelled him to run for mayor of San Antonio under the banner of the “Party Party” in 1979. As artist-activist, Elder has stood firmly in his support of local artists and art, first providing a venue for local artists at his MUD gallery on the river during the mid-1970s, then promoting multi-artist exhibits during the 1980s such as Loaded, Artist as Administrator, and Power to the Pulp.

In the last decade, Elder communicated almost exclusively with his friends and acquaintances through emails even though he did not own a computer. His messages which were often copied to scores of people including public officials, celebrities and out-of-town newspapers. In 2012, he was blocked from sending emails to members of the San Antonio City Council. As reported in the San Antonio Express News, “the hundreds of missives he has sent to City Hall — regarding everything from LGBT advocacy to interesting movies he has seen — have led local officials to put an end to his communications.”

In his own words

Following are vignettes from Elder’s journals which he shared with QSanAntonio in 2014.

Fairies Fiasco
Art events and gay civil rights were so interwoven in my life. I have had a great time looking back over all this. The journals pretty much start with the documentation of Fairies Fiasco, the camp ballet that I wrote as a protest to all the military harassment we endured being a gay disco in 1973. We performed it for three nights in March 1974. It is about the 12 seasonal fairies that reside along the San Antonio River and their queen and her daughter.

Elder for Mayor
In 1979 I ran for Mayor of San Antonio on the Party Party Ticket. This was the bright idea of Anne Alexander, Margie Shackelford and Alex Caragonne and a needed protest about the lack of art funding from the city, that didn’t see the need to promote or support the arts. Anne’s Charlton Gallery served as headquarters for fundraisers. Needless to say The Express News and The Light had great fun with our campaign and we got full support on the political page and in the art section. The fact that I was a known and open homo was hardly mentioned at all.

AIDS comes to San Antonio
With the 80s came the AIDies. The art world came out full force nationally during that decade as the problem grew into a tsunami of fresh hatred for the gay community. New York was giving the world Angels in America and ACT-UP. But what was San Antonio doing?

Time Capsule
In 1984 I curated the Time Capsule for the San Antonio Museum of Art to be opened in 2181. Gilbert Denman requested that date since he became my mentor for the project, the bicentennial of SAMA his reason.

The Time Capsule contains art works from 100 living artists, like Kathy Vargas, Marilyn Lanfear, Adan Hernandez Larry Graeber, Bill Bristow Anne Curtis, Bettie Ward and poems from10 poets, such as Berkeley Smith, and numerous pamphlets, invitations and books to document the community at that period in SA’s art history. Margaret Stanley provided a terrific photograph of her presenting Martha Graham with a San Antonio Society for the Performing Arts Award. The art community in 2181 will have a great time with this buried treasure box. I am so glad I did that. I can’t believe I did do it!

Art and the Blue Star
Blue Star would begin in 1986 and Arthur Veltman requested that I be the property manger. So there was a lot to collect during those years too. Davis Sprinkle, David Freeman John Dyer, the blue collar gallery with Holly Moe and Gary Schafter were artists I met then. Jeffrey Moore the Blue Star director headed up a great new era of art awareness for SA. Blue Star was a really great experience at the beginning.

Also, during that time, I curated two exhibits, Artist As Administrator and Power To The Pulp, which was inspired after my years of working and teaching in the papermaking studio at the Southwest School of Art and Craft. I invited 30 artists who had never worked in paper to create a new work. The exhibit was at the Locus gallery at the Blue Star. Some of those artists were Anita Valencia, David Casas, Henry Stein, Mike Pogue, Suzanne Paquette.

In 1989, Glenna Park curated the LOADED exhibit at Blue Star and I painted on 4 American flags. This was an interesting experience since it was during the time of national flag burning debates and whether the National Endowment for the Arts should be giving any money to gay and lesbian artists. You can imagine what that was like. And what was said. Patriotism was a hot topic.

March on Washington
In October 1987, Hap Veltman, Kenneth Garrett, Wade Strauch and I attended the Gay March in Washington D.C. And I did get arrested on the steps of the Supreme Court in a civil disobedience demonstration with many other queers from around the United States. A quote I love, that was shouted by all at the police wearing plastic medical gloves as we shook our figures, “Your gloves don’t match your boots!” As we stepped onto the Supreme Court steps we were arrested and taken to jail.

The death of Hap Veltman
When Arthur “Happy” Veltman died of AIDS on Dec 3, 1988 the HAPPY Foundation archives was started and collecting GayBLT history in files became even more efficient than journals. I consider this my really most important art project.

“I am glad to have lived in San Antonio during this time and I can’t believe that I was able to keep these journals and not lose them over the years,” Elder told QSanAntonio. “I feel like I had a front row seat in the eye of the hurricane, and I enjoyed every minute of it.”