It’s Finally Our Shot: A Review of Hamilton: An American Musical at the Majestic 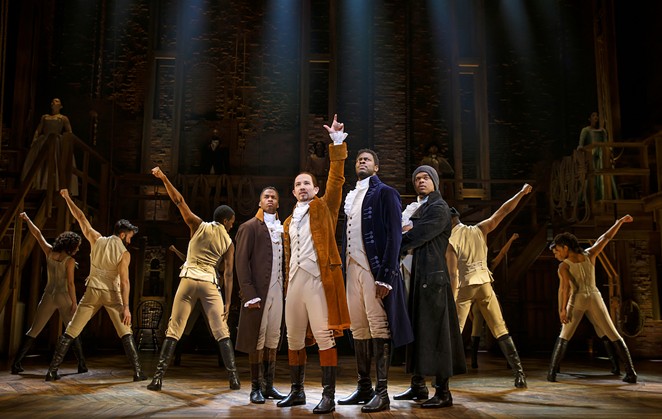 It is a measure of the cultural elation surrounding Hamilton that you can happily devour a minute-by-minute account of somebody else watching Hamilton. (In other words, you don’t even need to see it yourself: you can live vicariously through the transcendent bliss of others. It’s what Jesus would do.) For those who still prefer to see a musical rather than bookmark it, Hamilton finally arrives in San Antonio on its second national tour. Wednesday’s press night — played to a packed house at the Majestic — confirms that it’s worth the hype: the most important musical of the 21st century, and a worthy Pulitzer winner. Though I’ve some quibbles when comparing it to the Chicago production — my only other experience of the show — this is clearly the strongest musical to tour to San Antonio in years.

It’s also the unlikeliest. It’s hard to imagine how a musical biography of the nation’s first secretary of the treasury gained any traction whatsoever as an idea: after all, many Broadway-bound musicals are based on existing, glossy properties (such as the recent Mean Girls and Pretty Woman). Hamilton’s source, however, can be traced to a painstakingly researched historical reconstruction by Ron Chernow. (That doesn’t seem particularly promising. There’s a reason we’ve yet to see You’re a Good Man, Secretary of State Timothy Pickering: The Musical!) But creator Lin-Manuel Miranda latched on to a brilliant conceit. Here, Hamilton is not only an insanely driven, prodigiously talented Founding Father, but, more importantly, a scrappy immigrant from the Caribbean. (The best line from the show? “Immigrants – we get the job done.”) By casting the principals non-traditionally in terms of race — basically everybody but King George is non-white — Miranda ironizes every moment of stage time: the show thus makes clear that American foundational narratives belong to every group, even those narratives historically promulgated by the West’s most famous Dead White Men. 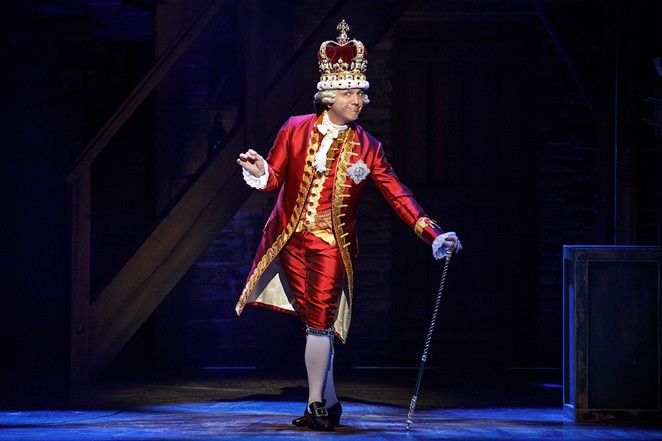 It’s an impressive achievement, propelled by Miranda’s innovative lyrics and score, which combine rap, pop and “traditional” Broadway show tunes into a stunning whole. “It’s Quiet Uptown,” a pensive meditation on death and heartbreak, is about as beautiful as a musical theater song can get. But the production is also surprisingly old-fashioned in one respect. It eschews the razzle-dazzle of yesteryear’s mega-musicals (like Wicked) with a production design that couldn’t be more barebones: basically just swinging ropes and wooden scaffolding, the very elements of narrative- and nation-building. This bold choice throws into relief the considerable achievements of director Thomas Kail and choreographer Andy Blankenbuehler, both of whom push the plot forward in a dizzying swirl of movement. (The march of time might be inexorable, but it’s surely more nimble as hip-hop.) The show’s three duels are master classes in staging, each building toward the next while highlighting the wastefulness and cultural confusion of that particular ritual. (We’re at tail end of the Enlightenment and yet still plugging each other with bullets benightedly.)

The touring cast is strong, especially Nik Walker as Aaron Burr — Hamilton’s nemesis — and Jon Patrick Walker, who practically steals the show as the preening, imperious King George III. (“You’ll Be Back” — the monarch’s hilariously passive-aggressive love song to America — demonstrates Miranda’s perfect ear for subverting musical theater tropes.) Joseph Morales’ Hamilton is sometimes overshadowed by Walker — perhaps an intentional choice — but Morales comes into his own in the musical’s darker second half. Marcus Choi makes for a particularly no-nonsense George Washington and thus an appropriate foil to the Francophile excesses of Kyle Scatliffe’s Thomas Jefferson. Erin Clemons, Ta’rea Campbell and Nyla Sostre — all terrific — round out the supporting cast as Hamilton’s wife, muse and downfall.

The gigantic Majestic isn’t, I think, the ideal space for Hamilton (and it’s worth recalling that Hamilton began life in the far smaller and funkier Public Theater in New York). Because Hamilton’s ultimately a character-driven piece, it’s better to sit closer than further, and seats to the side are apt to miss some of the staging, particularly on the scaffolding. The production’s tsunami of text requires some concentration, and I suspect most newbies would benefit from listening to the cast album at least once. But Hamilton is surely a game-changer in terms of American musical theater. It tackles some of the fundamental issues of our time — including considerations of race, immigration, politics and equality — and treats history as it should be treated: a key to a better future through clear-eyed analysis of the past.

After all, that’s our only shot.
Get our top picks for the best events in San Antonio every Thursday morning. Sign up for our Events Newsletter.