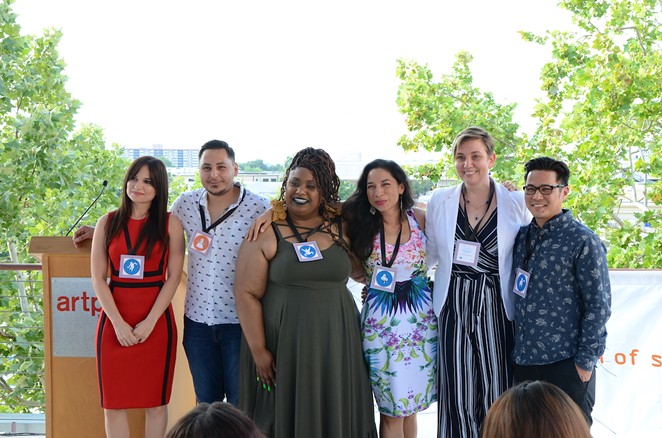 Local artists of all stripes gathered on Artpace’s rooftop yesterday evening for the announcement of seven grants awarded by the Artist Foundation of San Antonio, a nonprofit that’s distributed more than $700,000 directly to Bexar County artists since its formation in 2005.

After a bit of mixing and mingling over drinks and bites provided by Tim the Girl, the Artist Foundation’s Leslie Chasnoff took the podium to thank the 2019 judges, who sifted through roughly 150 applications, and grant sponsors — the City of San Antonio, the Tobin Endowment and the Smothers Foundation among them. Chasnoff then passed the mic to Luminaria Executive Director Kathy Armstrong, who teased the date for the 2019 Luminaria Contemporary Arts Festival (November 9), where Artist Foundation grant recipients will present realized versions of their proposed projects.

Easily the most eagerly anticipated portion of the evening came with the announcement of the People’s Choice award, which is determined by online voting and generated quite a buzz this year. That $15,000 grant went to spoken-word artist and vocalist Andrea “Vocab” Sanderson based on her proposal for She Tastes Like Music, a project she describes as “a euphony of original songs and poems.” Sanderson thanked God, her parents and 2015 grant recipient Tamara Adira (artistic director of the contemporary flamenco troupe Arte y Pasión), who assisted Sanderson with her proposal. Looking genuinely surprised and grateful, she described the eight other People’s Choice contenders as “extremely deserving” and joked that her folks would be mad at her, as she’d told them not to bother attending the event.

Grants in the amount of $5,000 were also awarded to the top three runners up in the People’s Choice category: poet Laura Van Prooyen and multimedia artists Jose Villalobos and Jennifer Khoshbin.