All Shows Must Die: What to Watch Next in a Post-Game of Thrones World

May 20, 2019 at 12:31 PM
comment
If Game of Thrones has left a dragon-sized hole in your heart, never fear! While your love for Jon, Dany, et. al will never be diminished, you'll be able to get your fantasy TV fix from a myriad of new and returning shows this and next year.

Gentleman Jack on HBO
If what you loved about Game of Thrones was the sex and intrigue, then Gentleman Jack will be right up your alley. An overdue look at a fascinating woman who has been dubbed the "first modern lesbian," the show shines a light on a portion of history that has until now been largely ignored. Landowner and industrialist Anne Lister left behind detailed, encoded diaries that took a century to originally decipher, and with new material still being uncovered, show creator Sally Wainwright will have plenty to draw from for future seasons.

Season 1 is currently airing on HBO.

Stranger Things Season 3 on Netflix
For season three, Stranger Things hit fast-forward (admittedly, their hand was forced by the principal cast's journey through puberty, but we can't fault them for that). The Hawkins kids may be returning as mall rats, but the trailer makes sure to remind us that it was only a matter of time until something new tears its way into the world from the Upside Down.

Watchmen on HBO
Rather than recap what was already put onscreen in Zack Snyder's 2009 The Watchmen, Damon Lindelof (of LOST fame) is putting his own spin on Alan Moore's epic comic series. HBO's trailer includes a lot of familiar imagery and trademark splashes of yellow, but the introduction of a Rorschach-inspired cult/militia and Regina King as a mysterious masked vigilante is plenty to pique our interest. With nothing else to go on, we'll just be muttering "tick tock" under our breath until the premiere.

His Dark Materials on HBO While 2007's The Golden Compass was hotly anticipated by fans of Phillip Pullman's YA trilogy His Dark Materials, misplaced religious uproar, mixed critical reception and a disappointing box office K.O.'d the possibility of any film sequels. Heartened by successful fantasy TV shows like Game of Thrones, Pullman partnered with BBC to adapt the books as a TV series, and with a stellar cast that includes Logan's Dafne Keen and Hamilton himself Lin-Manuel Miranda, the show looks like it will be a hit. His Dark Materials will air in the U.S. on HBO.

Premiere Date: According to HBO, "later this year."

The Witcher on Netflix

Get your first look at Henry Cavill in The Witcher! pic.twitter.com/1O2eWS1MkP

While not much is known about Netflix's production of The Witcher, the massively popular book and video game series has plenty of material to draw from. CD Projekt Red's expansive RPG The Witcher 3: Wild Hunt captured everything that fans love about the series — epic monster battles, rich characters and, of course, sex with sorceresses. Netflix's series is helmed by Daredevil writer Lauren Schmidt Hissrich and stars Henry Cavill of Superman-fame as the white-haired, cat-eyed Witcher Geralt of Rivia.

Premiere Date: Not yet officially announced, but will reportedly be released later this year.

Westworld III on HBO
For its third season (or "Westworld III," as HBO is calling it), Westworld is finally leaving behind the Delos parks that dominated the plot up to now. The latest trailer focuses on Aaron Paul as a new character, but be on the lookout for a familiar face at the end.

The Lord of the Rings on Amazon Prime 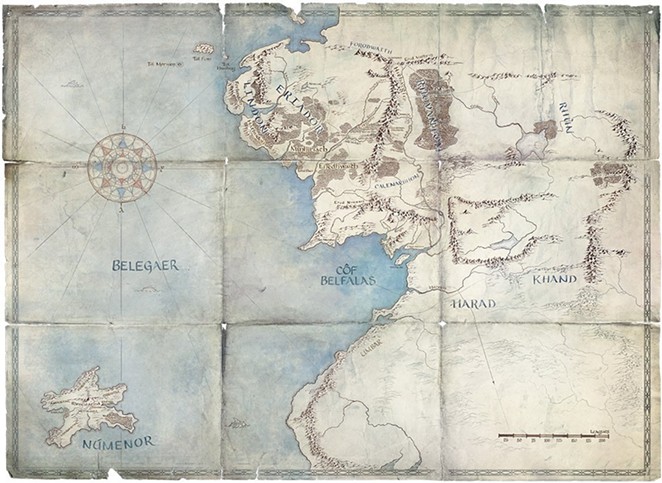 Between two film trilogies and a recent J.R.R. Tolkien biopic, Hollywood's Tolkien obsession doesn't seem like it'll slow down anytime soon. Amazon Prime nabbed the rights to Tolkien's The Silmarillion, an expansive history of Middle Earth that details everything you'd ever want to know about the planet Arda and its occupants, for a TV series that is now in early stages of production. Beyond the fact that the new series will take place during the "Second Age" (an almost 3,500 year span that took place prior to the action of The Lord of the Rings), no announcements have been made about the show's subject matter. Until we learn more, we'll just have to keep ourselves occupied with the detailed maps Amazon Prime has teased out.