In the ’70s, NASA scientists gathering data from seismometers placed on the moon by Apollo astronauts made a surprising discovery. Unlike earthquakes, in which underground vibrations decay quickly, seismic activity on the moon — called “moonquakes” — causes Earth’s orbiting body to vibrate for long spans of time. As it turns out, the moon’s rigid structure allows seismic waves to propagate with little resistance.

All this is to say, when you strike it, the moon rings like a bell.

San Antonio artist Amada Miller’s latest body of work, “Hollow Moon Rings Like a Bell,” opening at Blue Star Contemporary as part of the “Fünf” exhibition of Berlin Residency Artists, draws from the seismic study of the moon as well as research into the meteorite archive at NASA and the Lunar and Planetary Science Institute. In 2018, prior to leaving San Antonio for the Blue Star Contemporary Berlin Residency at the Künstlerhaus Bethanien, she collaborated with local glassblower Adam Smolensky to create a unique object based on her findings: a lunar bell.

During the Apollo missions, NASA triggered the type of moonquakes that set off long-lasting vibrations by crash landing four spent lunar modules on the moon’s surface, artificially recreating a common occurrence on the moon: meteor impacts. To represent these collisions, the body of the bell is composed of borosilicate glass in correlation to the high amounts of silica in moon rock, and the clapper is a piece of meteorite sourced from the Campo del Cielo (“Field of Heaven”) impact in Argentina. 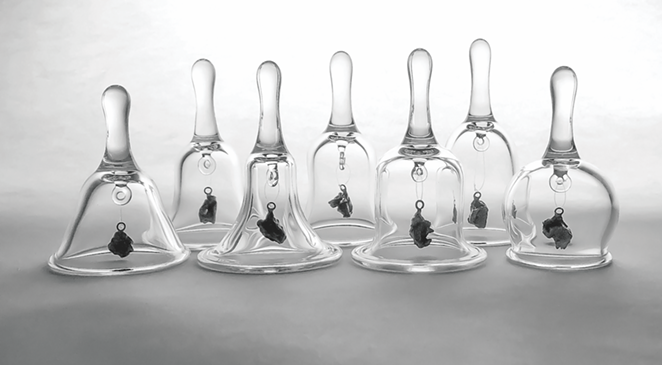 While in Berlin, Miller continued her research at the Museum für Naturkunde with the help of Ansgar Greshake, the museum’s Curator of Meteorites. She established a studio on the museum grounds and studied a collection of “iron meteorites that had survived the bombing and destruction of their east wing during World War II.” While the meteorites came out unscathed — the melting point of iron is 2,800 degrees, after all — all documentation regarding their origin was lost.

“I was able to make silicone molds of these meteorites, and once I was back in San Antonio, I worked with metal and glass casters [Oscar Saenz III and Hilal Hibri] to re-cast these shapes in bronze, aluminum beer cans, glass and plaster,” Miller says. “These pieces will also be on display with the bells at Blue Star.”

The show’s pièce de résistance, though, is the full set of Miller’s bells. Smolensky and Miller have made 55 to represent the 55 minutes of vibrations that resulted from the impact of the Apollo 12 module on the lunar surface. The bells are displayed on a long pedestal in the shape of a smooth sine wave that wends its way through the gallery space.

Each bell has a unique shape and timbre. Many have the familiar curving shape that flares out into a lip, but when played they tend to make a dry, staccato sound. Other bells ring with a pure, glassy note, sometimes with added overtones. The bells have not been tuned, so when two that are close in pitch are rung, the sound warbles.

As with any instrument, the bells don’t serve their purpose unless they are played. At the opening reception on Friday, June 7, Miller will invite visitors to ring the bells, filling the space with a miniature cacophony of meteorite impacts. 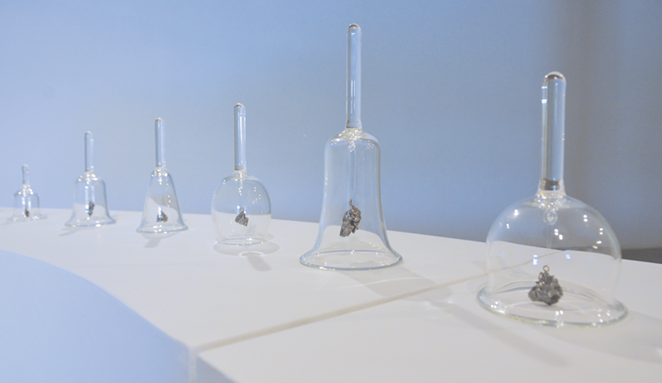 “I have to admit, I’m really worried that one will break or be dropped,” she says. “I’m looking at this exhibition as a practice in letting go a little bit. Generally, artists have intentions of placement, but I know I won’t be able to do that with this project. I’m going to initially set the bells, but once people start to play them, they’ll move around and I’m OK with that. Visitors will be asked to put on white gloves before they play the bells, and only one or two people will play at a time.”

This summer, Miller will also collaborate with local composer Nathan Felix to create an original composition using the bells. Felix’s score will combine the bells with additional orchestral instrumentation to bathe listeners in a wash of ambient sound via immersive use of the space. The performance is planned to coincide with the 50th anniversary of the Apollo 11 moon landing on July 20.

“Fünf” also showcases the work of the three other 2018 Berlin Residents, featuring symbolic, large-scale drawings of funerary wreaths by Andrei Renteria, a video installation documenting an evolving tape mural by Ethel Shipton and a glimpse into the immersive fantasy worlds of Jared Theis. The exhibition will run from June 7 to September 8.