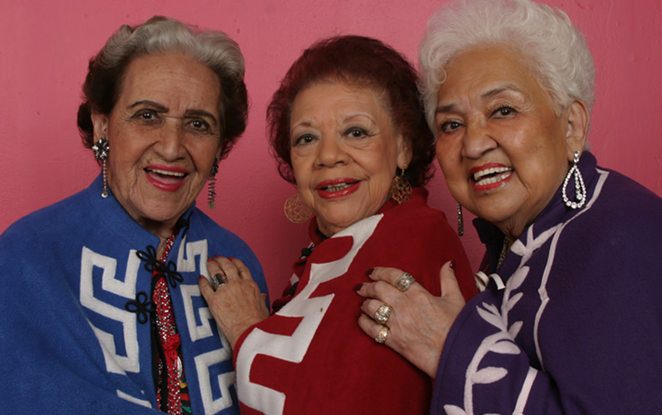 The National Endowment of the Arts has bequeathed one of 2019's nine National Heritage Fellowships to Beatriz "La Paloma Del Norte" Llamas and Blanca "Blanquita Rosa" Rodríguez, the remaining two members of Las Tesoros de San Antonio. Originated in 1982, the fellowship is granted each year to a selection of "master folk and traditional artists" in recognition of "the ways these individuals demonstrate and reflect our nation’s living cultural heritage and the efforts of these artists to share their knowledge with the next generation."

Las Tesoros de San Antonio is a Tejano supergroup originally formed with four members – Janet "Perla Tapatia" Cortez, Rita "La Calandria" Vidaurri, Llamas and Rodríguez. All four women grew up on San Antonio's West Side and enjoyed success as solo singers from the 1940s to the 1960s, inspired by and connected to legendary performers such as Lydia Mendoza and Eva Garza. In collaboration with San Antonio's Esperanza Peace and Justice Center, the Tejana women came back to the fore in the 2000s, teaming up "to preserve Mexican and bicultural musical expressions through their singing and storytelling."

Although Tapatia and Vidaurri have now since passed, Llamas and Rodríguez continue to perform as Las Tesoros de San Antonio to continue the legacy of the group. They will be honored along with the other 2019 National Heritage Fellows with a ceremony and a concert in Washington, D.C. in September.