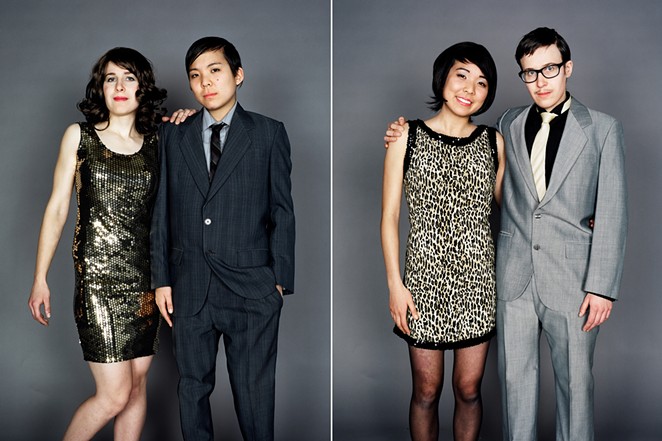 This article was originally published by Spectrum South.

Billed as Transamerica/n: Gender, Identity, Appearance Today, the show gathers 59 artists from across various mediums to form the first major survey of contemporary art to “explore the construction of identity through gender and outward appearance.”

The exhibition presents gender as part of a broad spectrum, which includes male, female and non-binary gender identities.

While the majority of the artists included come from underrepresented communities in the United States, Mexico and Canada, the exhibition also makes room for Japanese appropriation artist Yasumasa Morimura. In Dedicated to La Duquesa de Alba (2004), Morimura depicts himself as the famous duchess as painted by the Spanish painter Francisco Goya.

Also featured in the exhibition are photographers Graciela Iturbide, Robert Mapplethorpe, Lesley Dill, sculptors Greer Lankton and Frank Benson and installation artists Xavier Schipani and Jacolby Satterwhite. The work in Transamerica/n spans the 1970s to today and is presented within seven different themes including “The Performance of Dress,” “Home and Community,” and “The Authentic Body.”

Transamerica/n is held in tandem with Andy Warhol: Portraits, an exhibition which features over 120 paintings, prints, photographs and films depicting the artist’s inner social circle during the 1980s. Together, the exhibitions commemorate the 50th anniversary of the 1969 Stonewall riots, which served as a catalyst for the modern fight for LGBTQ rights.

At a recent information session, the exhibition’s organizers gathered to answer questions and address concerns the public might have about Transamerica/n. While some community members voiced worries over the “appropriateness” of the exhibition for young children, others expressed gratitude for the chance to bring their families to such a show.

Museum director Richard Aste pointed out that the exhibition will be a learning opportunity for the museum’s visitors.

“We are in the business of teaching through modern and contemporary art,” he said. “This exhibition is an opportunity for us to not only learn about ourselves, but also other members of our community, and to appreciate other points of view that may be very different from our own.”

Aste said that everything the museum does is grounded in its mission to engage “a diverse community in the discovery and enjoyment of the visual arts.” Transamerica/n is significant in that it spotlights communities of artists who have, up until now, been underrepresented by the museum.

“Everyone who comes onto our campus should have the chance to see themselves and feel truly engaged when they are here,” Aste said. “Everyone should know that they are meant to be here at the McNay just as they are.”

Fittingly, one of the first works of art viewers will see as they enter the exhibition will be Satterwhite’s neon sign, How lovly is me being as I am.

Renee Garvens, president of the San Antonio LGBT Chamber of Commerce, also participated in the McNay’s information session, and said that, in the past, visitors to Texas have been wary of the state’s level of inclusivity or LGBT friendliness.

“Honestly, Texas doesn’t have a good reputation in this community, so oftentimes we get asked to write letters in support of San Antonio and how inclusive it is,” Garvens said. “I think that this type of exhibit is putting us on the map for being a friendlier, more inclusive community that is more welcoming to millions of LGBT members from the United States.”

Another topic of concern was whether the museum had engaged with members of the transgender community before presenting the exhibition.

René Paul Barilleaux, head of curatorial affairs at the McNay Art Museum, said the exhibition’s content and structure was indeed shaped by input given by community members, including transgender and nonbinary individuals. He explained that the museum created two committees, one made up of activists and community members and another of arts professionals.

“From the very beginning, those committees met,” Barilleaux said. “We shared our thoughts, our concepts... lots of images. We looked at their reactions and we got their feedback.”

Another thing to remember is that while Transamerica/n spotlights many LGBTQ artists, it is not an exclusively LGBTQ show.

“If we are doing our job correctly, you should leave the McNay on every occasion [as] a different person than from when you arrived,” Aste said. “I think museums have that power, that capacity to expand our minds and connect us with other people. So, if you’re straight and you don’t see yourself here, then this is an opportunity to appreciate someone who isn’t the way you are, but it’s also an opportunity to empathize and walk away seeing the world through someone else’s eyes.”