San Antonio Deep Sea Scientist Among the Crew That Captured First Footage of Giant Squid in the U.S. 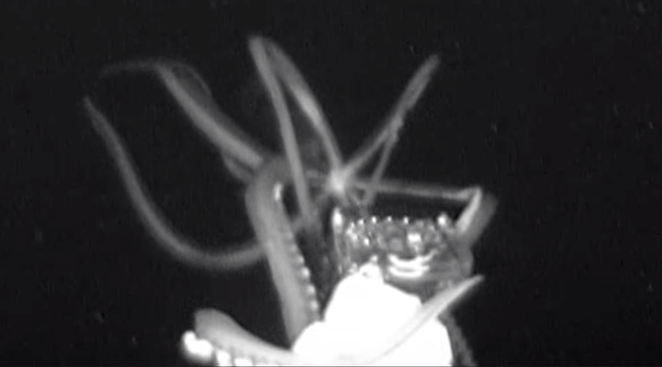 Back in the '90s, when you went to the History Channel for black and white WWII documentaries and Discovery Channel peddled in facts rather than reality TV, the two favorite mysteries covered by television documentaries (aside from spurious programs about cryptids) were the origins of Stonehenge and the provenance of the giant squid.

At the time, giant squids were known only by the gelatinous corpses that periodically washed up on beaches and large beaks found in the bellies of sperm whales. Sure, there were a few eyewitness accounts documentarians could pull from, but the best they could do for TV was to recreate the creatures in low-budget CG.

Since then, a few of these legendary invertebrates have decided they're ready for their close-ups, famously including a large specimen that wandered up from the deep into the comparatively shallow waters of Japan's Toyama Bay in 2015.

This month, scientists on NOAA's Journey Into Midnight expedition to the Gulf of Mexico weren't ostensibly searching for the real life kraken, but one came to visit anyway. On the mission was San Antonio's own Danté Fenolio, head of the San Antonio Zoo's Center for Conservation and Research and author of Life in the Dark, who told the Express-News that the animal caught on camera was 10 feet in length and likely a small male or young female, a far cry from the "150-foot-long, fire-breathing monsters" that hyperbolic denizens of the internet can claim them to be.

Intrigued by the expedition's undersea "e-jelly" rig, which included a series of lights that mimic bioluminescence, the Architeuthis dux was caught on camera briefly coming to investigate. This is the second time that a giant squid has been filmed with this camera system, which is called the "Medusa" – the first time was in 2012 off the coast of Japan.