A special screening of Warrior Women, a 2018 award winning documentary about the work of the American Indian Movement matriarch Madonna Thunder Hawk, will be held Sunday, July 14.

The Society of Native Nations will host the screening at Martinez Street Women's Center. The film will be followed by a community dialogue about the legacies of women leaders at the intersection of Indigenous, Black, Women's and LGBTQ liberation movements.

Warrior Women follows the story of the American Indian Movement of the 1970s through the perspective of Lakota mother Thunder Hawk and her daughter, Marcy Gilbert. The documentary shows the mother-daughter duo fighting as comrades for Native ecological sovereignty while untangling intergenerational trauma, Native identity and resistance. 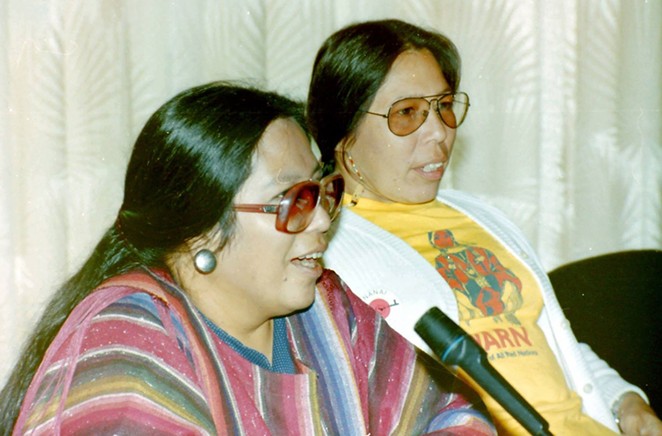 "Our voice and our story as women of the movement is the point of the film because we have never had that," Thunder Hawk said. "In Indian country, it's boots on the ground and you can't get more real than the women I work with. Our voices have always been silent and overlooked because we've been too busy, we don't have time to 'promote' ourselves."

Thunder Hawk said this film is "for all the younger women of all colors who are busy getting it done."

"Get it out there to mainstream white-male-dominated society because they don't learn this!" Gilbert said. "They don't get insights into our struggles. We're not over here living in tipis and hunting buffalo. We're over here fighting for our land and fighting to live. It's a living history. Everybody deserves to know this."

801 N.Olive
San Antonio, TX
(210) 908-9772
General Services
Map
Get our top picks for the best events in San Antonio every Thursday morning. Sign up for our Events Newsletter.