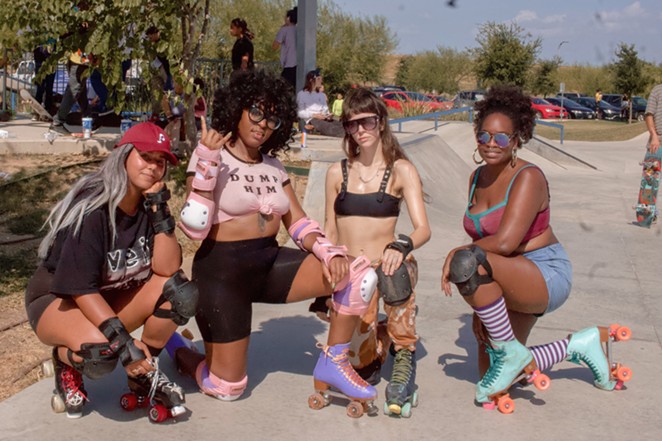 Success from an all-girls skate jam at Pearsall Park has prompted a community of female riders to be born.

And that was exactly the point.

Star Lozano, 18, and Lilly Goodale, 20, are two friends who met through their passion for skating.

"I started skating a little bit after I turned 17. It was so late because my mom never really wanted me to learn before then in fear of me getting hurt," Lozano said. "It, of course, wasn’t easy to learn. Getting on the board and balancing is easy enough, but learning tricks was and still is pretty hard for me. The challenge is fun though."

Goodale has a different relationship with skating.

"I got into skating when I was a kid. My older brother had a liking for it and I would follow him around with this rotting skateboard I found in the street," Goodale said. "Skateboarding really gave us something to bond over."

Along with her brother, Goodale was motivated to learn skating from a professional skater, Dylan Reider. She loved his style and skills he would showcase in his videos. Reider ultimately passed away from leukemia in 2016.

"When I heard the news, it stopped me...I had felt so connected to him and how almost spiritual he was on the board. After learning the news of his death, I felt like I’d be doing myself, and Dylan, a disservice," Goodale said. "I wanted to bring myself as close to him as possible and to honor him in some way. Skating really took off for me then."

While skating may not have always had as much an impact in the girls' lives as it does now, the sport has brought them together for something big.

Lozano went on social media to post about having a skate session for girls in the community. Goodale, who was only an acquaintance at the time, was one of the first to respond back to the post, and the idea of a skate jam event was born.

As conversations continued amongst the girls, support for the event grew as more people gained awareness of the July 20 event.

"There were more than 30 girls involved, but mainly there was about 9 of us that really put it together," Lozano stated.

"The event happened because the girls are happening. In the last few months, I started seeing more and more girls come out to the park. Naturally, I approach them, tell them 'what’s up, we gotta stick together,'" Goodale said.

She would notice a lot of girls telling her the same things repeatedly. "I’m not very good," "I’m pretty shy about coming to the park," and "I don’t have anyone to come to the park with" were common. She wanted a way for them to be able to meet up, make friends, build confidence and learn to skate together.

"Girls who skateboard – they’re hiding in your neighborhood right now!" Goodale said. "Some of them just need an incentive to get out. A better environment. Some friends. Some motivation...Definitely, the coolest thing I’ve ever seen, girls coming together to create."

Organizers all pitched in to buy everything for the event like food, drinks and various supplies. They also collected parts that were used to make complete boards at the event.

Fliers were made and posted to social media, and shortly after, local skaters and shops offered to sponsor the event. Local companies like Schlaudie Skate Co., Ugly Skateboards and Full Send Wax reached out to Goodale to send products for the event.

A good friend of Goodale's made "badass" Queen of San Antonio graphic shirts and also got in touch with the photographer at Thrasher Magazine, Michael Burnett, who sent a package of Thrasher shirts and other items to give out at the event.

"That was a big deal to me," Goodale said. "Thrasher Magazine getting involved with local, female skateboarding. That feels good."

The community responded well to the event as hundreds attended to enjoy a day of skating.

"We put on the flier that we were taking donations. Within 24 hours I had a full message box on my Instagram," Goodale said. "Everyone in our community wanting to get involved. It was beautiful."

In the future, they hope to get more girls involved in the event and make it bigger and better.

"I, along with the other girls, so want to have something like this in the future maybe on a bigger scale with other cities. [I'm] thinking about doing an actual skate competition in the future, if possible," Lozano said.

Both girls hope that the community left this event with a greater understanding of skating and what it means to have girls enter the same arena that guys do.

"Girls in San Antonio, skateboarding. Don’t forget that exists. Even if you ever did, we’re gonna make it pretty hard not to notice us," Goodale said. "We live in a time where people all over the world are fighting with all they’ve got to bring diversity into their communities. What we are doing here is for girls in San Antonio, but its impact goes further than just that. Building diverse communities of people goes exceptional lengths to establish equality and support in people’s lives. That is the medicine this world needs."