In defiance of the mid-June heatwave, the former warehouse at the junction of Roosevelt and Riverside was abuzz with a mix of art scene regulars and name-tagged young professionals.

The South Side Living & Maker Spaces, the brainchild of Blue Star developer and local arts patron James Lifshutz, were being christened with a pop-up exhibition dreamed up, in part, by recently transplanted San Antonio artist Jeff Wheeler. The doors of the unfinished gallery space lacked knobs, but the walls were bedecked with a selection of works by local artists as well as some surprises, including a few pieces by Texas music folk hero Daniel Johnston — one of Wheeler’s collaborators.

Little did Wheeler know as he mingled with visitors and local artists, the show was planting an important flag in his adopted hometown. The pop-up opened the door for him to become The South Side’s creative director, where he’ll elevate it from just another set of condos to a community art hub. Between his role at The South Side, a bevy of current and upcoming exhibitions in and out of San Antonio and two forthcoming books, he’s already making his mark on the Alamo City arts scene.

Wheeler’s arrival in San Anto was no mere happenstance. Instead, it was the result of a years-long campaign by FL!GHT Gallery’s Justin Parr and fellow artist and gallerist Hills Snyder to lure him to the Alamo City. Even if it took a while for the move to happen, the difficult part wasn’t convincing him this was the place to be.

“For many years I’ve wanted to move here, just to be a part of the amazing artist scene,” said Wheeler, 51. “Not only are they really good, but they treat each other amazingly, you know? You don’t see that anywhere else.”

If you don’t know Lifshutz’s name, you know his work. He’s behind the revitalization of the Blue Star Complex and also donated the Hot Wells ruins to the county for transformation into a public park. For his latest trick, Lifshutz has converted an abandoned warehouse — formerly the site of an Earl Campbell food-packing plant — into a series of affordable one-bedroom apartments and artist studios that he hopes will transform the industrial area into a thriving arts community.

As the complex took shape, one thing remained missing: someone to steer the ship. When Lifshutz met Wheeler in June, he realized the artist’s potential.

“After that event, we both felt that it would be fun and cool were he to continue to curate things there,” Lifshutz said.

Thin and tall, but not too tall, and with a tan earned by a life spent outdoors on the panhandle’s flatlands, Wheeler engages everyone he speaks to — artists, real estate investors and random people off the street — with a warm, yet piercing gaze. In a husky drawl, he offers up an endless stream of energy and ideas. He flits effortlessly from subject to subject without losing the throughline of a conversation, looping back to finish a story whenever a tangent takes things off course.

You could say Wheeler’s a Lubbock transplant, but that would leave out a long detour that included a year spent curating James Surl’s Splendora Gardens outside of Houston, a self-made residency in Croatia (where he traded art for rent in a picturesque village off the Adriatic Sea) and a couch-surfing itinerancy across America during which he caught up with old friends and made lots of new work.

Although reluctant to settle in a new city without concrete prospects lined up, he moved into Snyder’s Castle Hills home in late March, caring for the property while Snyder undertook a move to Magdalena, New Mexico, to run a new art space. Wheeler set to work without delay, scheduling exhibitions both in San Antonio and across Texas, including the June pop-up at The South Side and multiple iterations of “On Their Way to Heaven or Hell,” a recurring exhibition of his and Johnston’s collaborative art.

When people talk about Wheeler, they don’t wax poetic about his artistic genius. Instead, his work ethic and infectious collaborative spirit are more likely to come up.

“If you spend any time at all with Jeff you find this out — he never quits working,” Snyder says. “It’s inspiring to be around. We spent a day together in late December 2014, drawing the entire day in his Lubbock studio. I have not stopped drawing since.”

Early on in their friendship, Parr joined both Wheeler on a West Texas camping trip organized by Snyder.

“We’d be sitting there — everybody’s having dinner or whatever — and Jeff’s drawing,” Parr recalls. “He’s giving everybody else a pad of paper, a pencil, whatever and he’s like, ‘Here, come on everybody, draw! Let’s go! Come on, let’s make something.’”

Wheeler’s penchant for collaboration took off in grad school, when he began making art with James Porter — now the exhibition designer and production manager for Wichita State University’s Ulrich Museum of Art — under the nom de guerre Franklin Ackerley. The pairing was so successful that Ackerley began to develop more of a reputation than the artists behind him. He even has a film credit to his name.

After completing his master’s in Washington state, Wheeler decided to return to his roots, settling in Lubbock with his brother Bryan. Soon, the dynamic duo emerged as the Wheeler Brothers, producing a bevy of collaborative paintings that debuted across Texas, including at the show “Low Tech Innovations (Done at a Leisurely Pace),” curated by Snyder at Sala Diaz.

Unlike most artists, Wheeler doesn’t just rely on old friends and networking tactics. Instead, he continuously reaches out to the people he admires, forging his way into new partnerships through sheer force of will.

“He always fascinated me,” says Parr, “because if he’s a fan of an artist he will go out — and even if that person’s three states away — he will drive to that state, somehow figure out a way to meet that artist, give them a piece of his art and tell them how much they’re important to him. And then make contacts with them and make art with them!”

One such collaboration is Wheeler’s ongoing work with Johnston, the outsider singer-songwriter and folk artist many recognize from Austin’s “Hi, How Are You?” mural. A fan of Johnston’s since the ’90s, Wheeler reached out five years ago and got the O.K. from the reclusive artist’s brother and sister to mail pieces for him to finish.

“The first series I gave him, I never saw finished, because when [Johnston] did them, his dad said that they were all so nasty that he didn’t want anybody to see them,” Wheeler said. “He destroyed them, so I’ll never know. Which is weird, because all of his stuff is kind of weird, so there’s no telling what that could’ve been.”

He sent a second series to Johnston’s sister, not knowing whether he’d see those in the end, either. As it turned out, he soon received the finished works in the mail. Populated by brightly colored torsos, humanoid ducks, eyeball monsters and the inner thoughts of trees, it can be hard to discern who contributed what to each piece, despite each artist’s distinct style. Wheeler considers them the best of his collaborations with Johnston.

The partnership between the two has since flourished, and Johnston even performed at a few of their exhibition openings.

While Wheeler is loath to spend time speaking on the conceptual underpinnings of his work, certain things about his art are clear. His collaborative spirit even extends into many of his solo pieces, in which he merges found objects, from old family photos to vintage ceramics, into new assemblages. He reacts to their original shapes while transforming them into something more.

Believe it or not, collage and assemblage art — which make up a hefty portion of Wheeler’s current output— weren’t always his style. 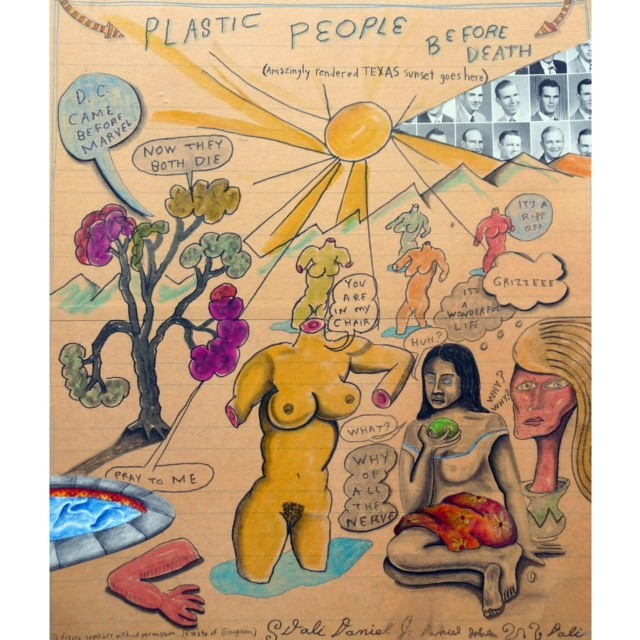 “I’d always just made fun of collage artists to tell you the truth,” he admits.

But, whether it be sketching bare legs on top of a child’s portrait, reassembling candid photos into new action or epoxying thrift store ceramics into new configurations and transmuting them with painted designs, Wheeler has found joy in “bringing back to life things that were forgotten, polishing them up and making them maybe a little bit important again.”

That description doesn’t even scratch the surface of the artist’s recent output, however. Among his smorgasbord of new work is a series of abstract murals painted in Croatia, landscape illustrations with clever twists and gestural paintings that include a playful reimagining of American Gothic recast with the Mona Lisa and Gaugin’s Yellow Christ.

“I really don’t know what I’m going to do every time I go into the studio, and that’s what keeps it fresh for me,” he says.

Wheeler’s first summer in San Antonio culminated with simultaneous First Friday openings at two Blue Star galleries in August. “Low Tech Innovations (Done at a Leisurely Pace) #2” at FL!GHT Gallery served as a sequel to the show that first introduced him to San Antonio, featuring greatest hits from his and his brother’s past few years of work plus new collaborations. In nearby DAMAS Gallery, he premiered the Warhol-inspired assemblages of “now even better!!” Many of those pieces were made from ceramics found at San Antonio thrift stores.

If that weren’t enough, Wheeler also has two books coming down the pike. He’s teamed up with Cattywampus Press — the Austin publisher behind King of the Commode, a monograph preserving the work of Barney Smith, San Antonio’s late toilet-seat artist — on two wildly different projects, a coloring and activity book of Wheeler’s and Johnston’s collaborations and a long-overdue catalog of the Wheeler Brothers’ output.

While the latter of the two books may be a long time coming, the coloring book is expected out by Christmas. That will let buyers spend their holidays adding their own artistic flourishes to Johnston’s and Wheeler’s illustrations. Those who want to go for the gold can even send the finished pieces to Wheeler, who plans to feature some of them in a future exhibition.

As the creative director of The South Side, Wheeler will begin curating regular exhibitions in the building’s in-house gallery once it opens to residents. He also plans to host special events such as movie nights and Spurs playoff watch parties. Apartments and studios are currently available for pre-lease, with move-ins anticipated in September.

Lifshutz is confident that Wheeler’s energy, work ethic and collaborative spirit will make him the perfect person to realize his vision for The South Side.

“The character and vibrancy of this stretch of Roosevelt and the River is being transformed from vacant and blighted to something super cool,” Lifshutz says. “It’s a blank canvas, so to speak, and [Wheeler] is a very talented and creative guy. So, buckle up!”