A day after Alamo City Comic Con finally announced their 2019 dates, Traders Village revealed that they're also getting in on the action — on the same weekend, no less. 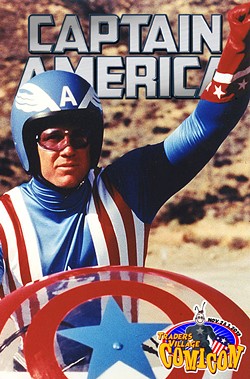 event celebrating all things geek, which it's calling Traders Village ComiCon. Hell, it's even got a special celebrity guest on deck — Reb Brown, the  O.G. Captain America, who starred in the 1979 made-for-TV film. Traders Village is so jazzed about Brown that they're integrating a Captain America element into this year's corn maze design.

More celebrities are set to appear at the con, but Traders Village isn't yet naming names. So far, they've teased a WWE Hall of Famer and "something for the Star Wars fans."

The free event won't have quite the clout of  the myriad other South Texas conventions already vying for Alamo City fans' attention, but if your think you can fool your kids into being excited to meet "a" Captain America rather than "the" Captain America, a trip to this new con on the scene may be worth your while.