Trinity University turned the big one-five-oh this year, and isn't afraid of showing its age. The college has already hosted a constellation of events honoring its sesquicentennial anniversary, and the Music Department is adding to the celebration this weekend.

On Saturday, the Trinity Symphony Orchestra will premiere a new symphony by the university's resident composer, Brian Bondari, who was asked to compose the new work in honor of the school's milestone anniversary.

"Symphony No. 2 began its life as a single-movement piece originally titled 'Festive Overture,'" says Bondari. "But as I thought more and more about the 150th anniversary of Trinity's founding, I wanted to complete a project that would be worthy of such an occasion. Thus, the project continued to grow in size and scope until it became my second symphony." 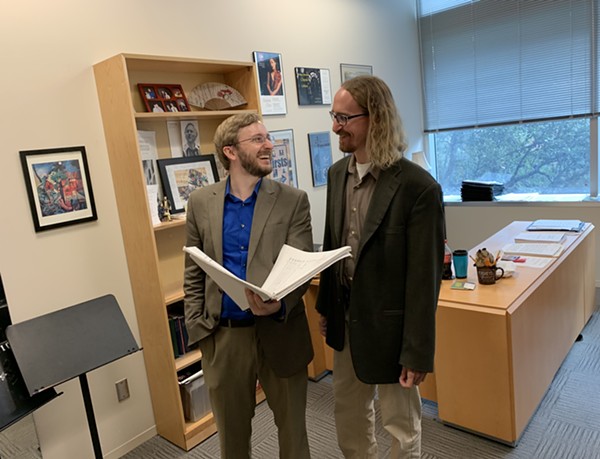 In addition to the world premiere of Bondari's 2019 Symphony No. 2, the  concert features Manuel De Falla's El amor brujo and Antonín Dvořák's Slavonic Dance No. 8 in G Minor. Trinity Symphony Orchestra director Joseph Kneer chose the two pieces partly due to their age – El amor brujo was composed a little over a century ago, and Slavonic Dance No. 8 is nearing its own 150th anniversary.

"These dates are no accident," says Kneer. "Alongside Brian's work, the concert creates a kind of timeline which parallels Trinity's founding and development."

The program will be rounded out with a performance of the W.A. Mozart's The Magic Flute aria "Ach Ich Fuhls" by soprano Odet Torres with accompaniment by the 65-piece ensemble.

"It's an honor to present Brian's new symphony," Kneer adds. "It's a beautifully lyrical work with flashes of fanfare that I think quite aptly encapsulates both the celebratory and solemn aspects of this occasion. It is both a retrospective and forward-looking work that forms the centerpiece of our concert, and one that I think the listener will find immediately accessible."