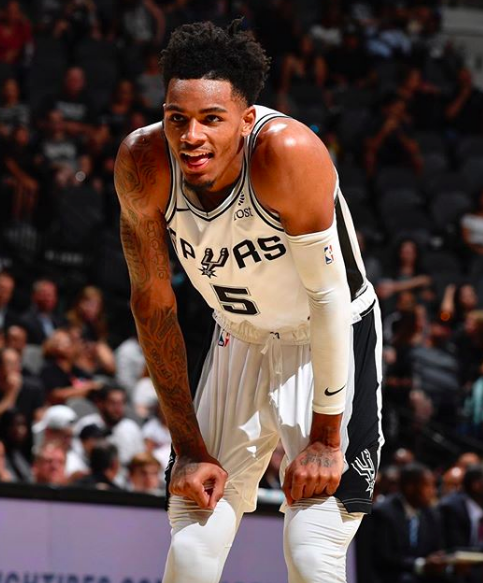 Dejounte Murray is sure about being a Spur.

On Monday, the 23-year-old signed a four-year, $64 million contract to stay with the San Antonio team. The contract extension comes after Murray missed the entire 2018-2019 season due to a season-ending ACL injury last October.

During his time on the bench, Murray noted that he was dedicated to the Spurs, even clapping back at online trolls who said he'd be smart to leave San Antonio after he fully recovered.

HELL NO, I Want To Be Here Forever, Thats Why I Work My Ass Off. Build Championship Teams Not Go Chase After Them!!!! 💯🤷🏽‍♂️ #GoSpursGo https://t.co/CaOGNCpVhD

With the latest career decision, he just proved how serious he was about that.


Murray also took to social media to share his feelings about his staying with the Spurs, who drafted him in 2016.

SAN ANTONIO, We Are Locked In For 4 More Years And I Couldn’t Be More Thankful And Grateful For The Love And LOYALTY From The Spurs Organization, All The Way To The Fans Across The World. I’m Still Speechless And Lost For Words. 🙏🏽😢🖤 The Best Part Is I Got A Lot Of Work To Do! pic.twitter.com/KOCzLQYmH8


The extension will kick in next season, as this one is the last in his rookie contract.

Murray also signed a multi-million dollar shoe endorsement deal with New Balance on Monday. This kid sure is having one hell of a week.