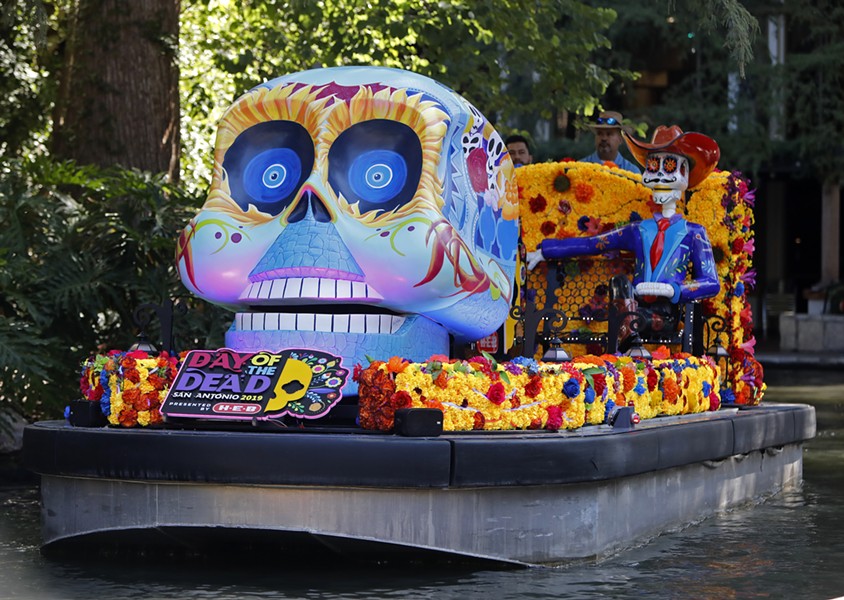 Forget about the Macy's Day Parade — the biggest event of the year is going to be Catrinas on the River Parade from here on out. San Antonio is not messing around with its inaugural river barge parade, which is a major jewel in the crown of the city's new official Día de los Muertos festival. To prove it, they've appointed a fancy grand marshal for the parade: none other than Desperate Housewives actress and former spouse of Spurs royalty Tony Parker Eva Longoria.

The parade will showcase over 20 river barges — or "trajineras" — that spotlight local organizations, special guests and dignitaries. The barges will float along a route that begins and ends at La Villita, with parade attendees seated at various points along the River Walk to watch. Alongside Longoria, Dick Tips, Chairman and CEO of Mission Park Funeral Chapels and Cemeteries, and his wife, Kristin Tips, the President and Funeral Director of Mission Park Funeral Chapels and Cemeteries, will serve as the official Catrine and Catrina of the parade, reigning over the festivities in traditional Day of the Dead skeleton makeup.


Longoria shared the announcement of her appointment as grand marshal via a video en español on Day of the Dead San Antonio's Instagram today, and also said that her charity organization Eva's Heroes would be represented with a float in the parade. Eva's Heroes provides aid to teens and young adults aged 14 and above with intellectual special needs, seeking to help them "integrate and flourish in society." Longoria founded the organization in honor of her sister, Liza, who was diagnosed with a developmental disability.

Tickets for several sections of parade seating are already sold out, but many are still available. For those who miss out or otherwise can't make it on Friday, KSAT12/ABC will air the parade live in a three-hour broadcast from 7-10 p.m.