Fans Confused When Tim Duncan Steps Up as Head Coach, Not Becky Hammon, After Gregg Popovich Ejected During Spurs Game 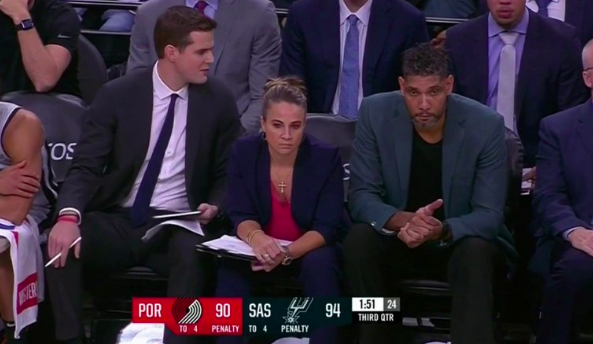 When Spurs head coach Gregg Popovich was ejected during Saturday's game, it was assumed that the lead assistant coach would step up. That meant, in theory, Becky Hammon would take the reins from the sidelines.

Except, that's not what happened.

Hammon, a former WNBA player, became the first female to hold a full-time assistant coach in the NBA when she joined the Spurs. If the logic of the top assistant taking over in the absence of the head coach had held up, she would have been the first woman to serve as head coach of a major men's professional sports team in the U.S. — even if just for a while.

Although Hammon kept on doing her thing after Popovich was ejected during a foul call in the third quarter of the Spurs' matchup against the Portland Trail Blazers, Pop later clarified that Hammon wasn't filling his shoes for the rest of the game.

Hammon led the coaches' huddles during timeouts following Popovich's ejection, while Tim Duncan, the longtime Spur who's in his first season as an assistant coach, consulted with players.

During a post-game conference, confused media asked Popovich to clarify who was the head coach for the rest of the game.

"Timmy was," he answered.

As for Hammon not being in the lead?

That comes after folks on social media assumed during the game that history was in fact being made.

Raps/Mavs in Dallas is pretty absorbing ... but hard not to shift focus right now to San Antonio: Gregg Popovich has been ejected in the third quarter and Becky Hammon is now coaching the Spurs — with Tim Duncan as top assistant

A look into the future tonight: Gregg Popovich ejected, Becky Hammon becomes the first woman to take control of an NBA team in a regular season game. Suspect it won't be long until she's given a head coaching opportunity in the league.
About her journey: https://t.co/ftPw91xa8R

Since Becky Hammon is officially listed as first assistant with Pop’s ejection she becomes the first female acting head coach of an NBA team during the regular season. And I can’t think of another time in any of 4 major US sports.

The first woman to serve as a head coach of a USA men’s professional sports league.

Becky Hammon has now officially served as the first woman head coach in the NBA. In 2019. #WomenInSport pic.twitter.com/sWmOpuSXEP

It's a hard for me not to see last night as another ex. of a qualified woman being robbed of a chance at history bc a man with less experience was "more deserving" of the job.

That's awesome, reporter is more interested in the politically correct angle of the story, Pop just tells it like it is though...

Chauvinist Pig. Becky is lead assistant and "Timmy" has been coaching for about 15 minutes.

I want Becky to get in to get her slice of history but goddam do I love this man. Ask a question, by God he'll answer it. Barely.

BUT Pop said after the game that it was assistant Tim Duncan that actually took over 😢
pic.twitter.com/g9e8S0Di1X