A Naughty Elf Premieres at The Public: Elf The Musical Is a Holiday Spectacle for the Whole Family

The Broadway adaptation of the modern holiday classic Elf made a scintillating regional premiere at the Public Theatre of San Antonio on Thursday.

The musical retained the uniquely awkward appeal of the 2003 Will Ferrell film, telling the story of Buddy, an orphan raised by Santa’s elves who realizes he’s human and travels to New York City to meet his workaholic father, who wants nothing to do with him. It’s a story designed to convert the most skeptical Scrooge, appealing to the weary urbanite in all of us who just wants to mumble when someone implores us to sing. 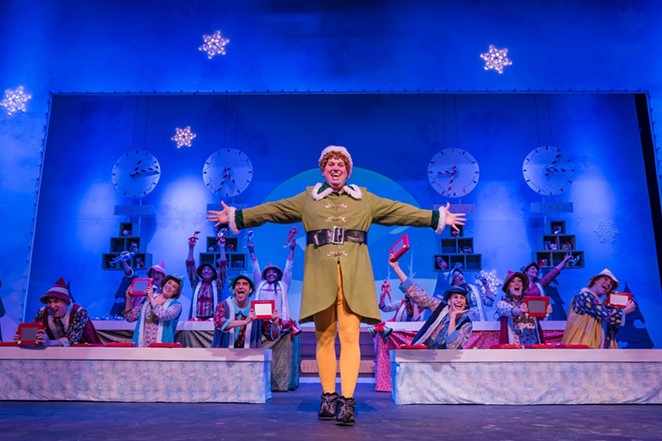 While the film resides in a distant celluloid world where the Rankin-Bass stop-motion characters of Christmas yore haven’t aged a day, the stage version must confront the potentially troubling reality of a grown man exhibiting wildly childish behavior. This script is therefore more concerned with the state of various characters’ sanity, riddled with lewd jokes and contemporary references that serve to extend the audience's comfort zone.

That being said, the Public’s rendition makes some welcome revisions to maintain a family-friendly atmosphere. The production doesn’t exactly pull its punches so much as sagely sweep them slightly behind the curtain. In a show that dances a lively jig between irony and sincerity, it’s quite an achievement that nary an eyebrow is out of place.

On the other hand, songwriters Sklar and Beguelin’s conservative decision to set the saucy “Nobody Cares About Santa” at a Chinese restaurant rather than at a bar is somewhat overruled by the Public's choice to litter the eatery with brown bottles. But that's a mere quibble. It’s a joy watching gritty Brooklyn Santas bounce on their red bags while singing a jazz rebuke of the jaded youth these days. Considering they’re all in plus-size padding — which they reveal with a steamy flourish — it’s one of many impressive feats by the ensemble cast.

In a way, that attitude pervades the production: the ensemble seems organically invigorated by Buddy’s enthusiasm, and even the orchestra's conductor gets in on the fun.

In short, if you can’t come around to this show you’re a Cotton-Headed-Ninny-Muggins.