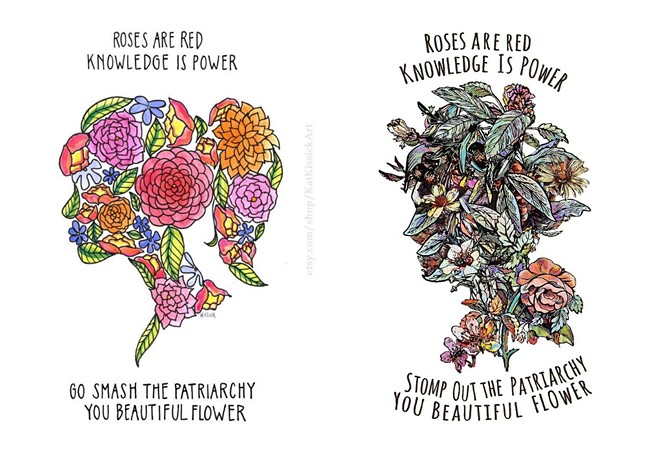 Last week, local artist and Northeast Lakeview College professor Karl Frey got called to the mat by St. Louis artist Kat Kissick, who alleges that he copied an illustration of hers that went viral in October 2018. Both illustrations feature a woman's profile drawn as a floral silhouette, accompanied by two very similar poems. Kissick's reads, "Roses are red / Knowledge is power / Go smash the patriarchy / You beautiful flower," while Frey's changes "Go smash" to "Stomp out."

According to the Riverfront Times, the Current's sister publication in St. Louis, Kissick discovered the alleged knockoff via a Google image search, which revealed Frey's very similar design for sale on Redbubble, a print-on-demand online marketplace.

It doesn't help that Frey, a man, appears to have copied Kissick's explicitly feminist illustration.

"He took the concept of my design, he re-did it in his own style, changed 'smash' to 'stomp' and called it a day," Kissick told the RFT. "Like, thanks for making my point, guy."

Upon finding the image, Kissick posted a screenshot of the artwork to Facebook along with an email she sent to Frey demanding that he take down the copycat image from both his Society6 and Redbubble stores.

"Do you even see how fucked this is? That you — a (presumably) cis white male stole a design about smashing the patriarchy from a woman? Are you kidding me????? It's almost fucking laughable. Almost," the email reads in part.

Kissick lovingly signed the email, "You're the patriarchy I'd like to smash."

According to the RFT, Frey took down both listings on Wednesday. The Redbubble link is no longer active, but cached images are visible on Google image search.

While Frey declined to comment to the RFT, he did send an email response to Kissick, which she also posted Facebook. In the email, he admitted to being asked to copy the artwork by his wife's boss so that they could get it printed on a t-shirt, and that he made an effort to alter at least 20% of the image to make sure it was "an original work and not a simple derivative of [Kissick's] design."

Frey claimed that he was told there wasn't a T-shirt featuring the artwork available, but presumably didn't follow up on that assertion. Purportedly, he made no sales on either online platform, and only uploaded the image so that his wife's boss could choose a type of tee.

The irony? Kissick was indeed selling her original piece printed on shirts.