Trey Lyles Spills Fan's Beer Over Her During Spurs-Rockets Game 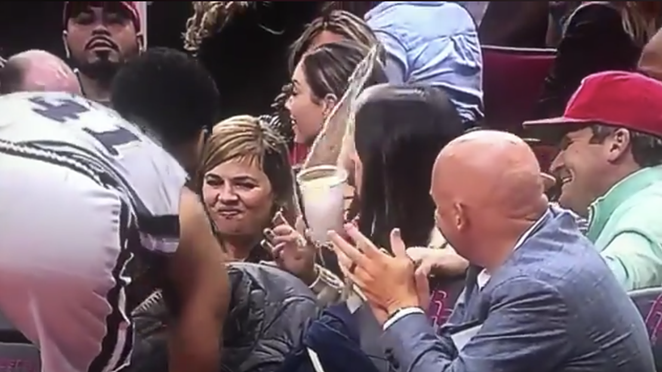 While most San Antonians wouldn't be too bothered if a Spur spilled beer on them, such wasn't the case for one woman at the team's matchup against the Houston Rockets.

Trey Lyles, the power forward in his first year with San Antonio, committed a party foul during the team's appearance at the Toyota Center Monday night.

And we say party foul because this was completely separate from the game of basketball.

In a clip being shared across social media, Lyles can be seen courtside trying get the basketball from off the sidelines. The ball was apparently stuck among the filled seats, making it a difficult to free the ball.

At one point, Lyles flicked the ball, causing it bounce into a woman's lap.

The problem was the woman had a cup of beer in her hands. So the suds spilled all over her. The moment has been caught and shared across Twitter, naturally.

This was ruled a flagrant 2 party foul on Trey Lyles pic.twitter.com/Ts9uwgZL0j

Heck, most people would be mad to be drenched in their own $14 beer. But if you have court side seats, $14 is nothing, right?

In Lyles' defense, it totally looks like the woman could have helped free the basketball if it was in her personal space. Instead, it appears she completely ignored the NBA star in front of her.

But, hey, maybe that's just us.