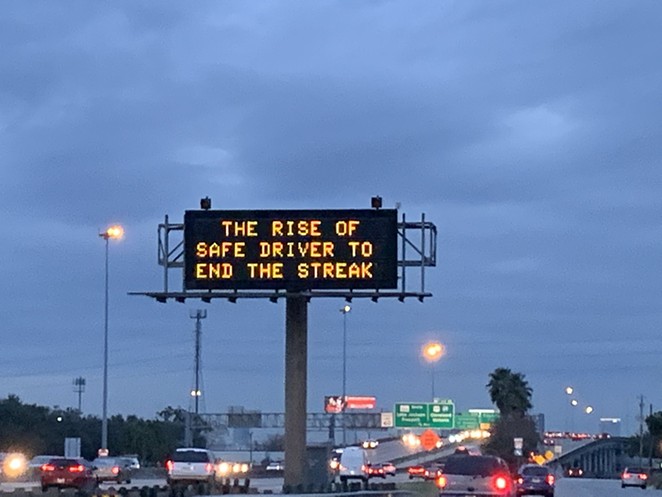 Well known, it is, that the Texas Department of Transportation (TxDOT) loves to serve up dad jokes on its signage.

Now, in honor of the final entry in Disney's new Star Wars trilogy, TxDOT has reserved the latest of those jokes for a series of "End the Streak" safety messages shouting out The Rise of Skywalker as well as The Mandalorian character and instant meme Baby Yoda.

The alternating messages "The Rise of Safe Driver To End the Streak" and "Baby Yoda Uses A Car Seat / Be Safe He Will" appeared on signs across Texas Friday morning, and were quickly pointed by Twitter-savvy commuters all over the state. Eagle-eyed Twitter user @tanner_biggs1 confirmed that they're on display in the Alamo City as well.

TxDOT followed up the signs by tweeting a Baby Yoda GIF along with the message, "Precious cargo it is. Text and drive do not. Let's make sure Baby Yoda makes it to his destination safely this holiday season."

Precious cargo it is. Text and drive do not. Let’s make sure Baby Yoda makes it to his destination safely this holiday season. #RiseOfSkywalker #StarWars pic.twitter.com/wTSxC4et30


It's not just TxDOT that's getting into the Star Wars spirit. On Thursday, Mayor Ron Nirenberg tweeted a photoshopped image of Baby Yoda wearing a Spurs hat and holding a bag of Whataburger on the River Walk, writing "There's always a special kind of force around the River Walk this time of year."

There's always a special kind of force around the River Walk this time of year. pic.twitter.com/WAIpxZ0n2R


The Spurs got in on the action as well, tweeting a video announcing Thursday's game styled in the manner of the Star Wars opening crawl.