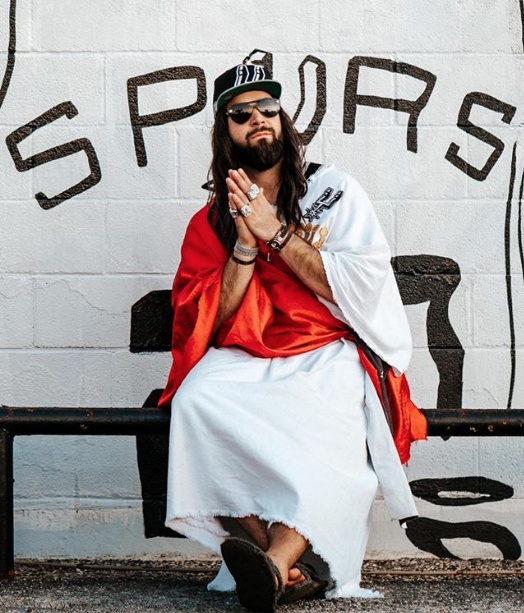 San Antonians are taking to social media to put Spurs Jesus on blast.

The local celebrity-slash-superfan is facing criticism after commenting on Instagram that his hometown NBA team just doesn't show him enough love.

The anger arises from SJ's comment on a post from Nav Bhatia. For those not invested in the world of basketball, Bhatia is a Canadian businessman, millionaire and self-described superfan of the Toronto Raptors.

Ahead of Sunday's Spurs-Raptors matchup at the AT&T Center, Bhatia shared a photo of himself hugging longtime Raptor — and current Spur — DeMar DeRozan on the court. In the sentimental caption, Bhatia described seeing DeRozan play for another team as "watching your son play for someone [else's] family" and referred to him as "our boy."

I will never forget that first time the @raptors played @demar_derozan when he became a Spur. It was like watching your son play for someone elses family. Time moves on and yes things worked out for everyone especially the road we went down but it doesn't make it any easier having to let one of your own go. Once a raptor always a raptor. I know our front office never wanted to make the move but HAD to make the move. Tomorrow is always the game I circle first on the calender. Can't wait to see our boy.


It didn't take long for Spurs Jesus to kill the mood, making Bhatia's heartfelt post about himself.

Wait, it gets worse.

"I've been doing my thing for an entire decade. Been there through the good times and the bad," the comment reads. "Was there screaming my guts out in 2013 when the trophy was ripped from us. Was there courtside the next season when the AC went out in game 1.... was there courtside screaming my guts out during that game & game 5 in San Antonio in 2014 when we won the championship."

Im sorry but does this annoy anyone else?! 😒 pic.twitter.com/UTYchfBhHW

"Why no love? Just makes no sense," Spurs Jesus concludes, but not without a shrug emoji.

Thanks to screenshots of the comment, San Antonians have been able to see proof of SJ's concerns for his own self-interest. Some have even called out the personality as "entitled."

That annoys me. You can support them without expecting anything in return & if you don’t feel appreciated as a fan because you’re doing the most then stop doing it lol no one asked for a Spurs jesus. And he doesn’t even post about church lol #triggered

That’s so crazy to me bro. The sense of entitlement is ridiculous. It’s one thing for a person to get attention like Nav. He’s loved by the team and the fans of the Raptors. Dudes a legend there. Isn’t this dude just a random Spurs fan who dresses up like Jesus?

It’s just like great you were court side cheering (like all spurs fans were regardless of seat position) but it doesn’t make u super fan level of nav bc you dress up as Jesus (gimmick) while you do it .. it’s weird he felt the need to comment that like he’s owed some recognition


Others have said they're not surprised by the local celeb's comment, given his past behavior.

Taking a thoughtful and heartfelt post about DeMar DeRozen and making it about himself is the pendejo energy we’ve all come to expect from Spurs Jesus. https://t.co/f5722aAsOm


As always, some local Twitter users brought the jokes.

Spurs Jesus is getting crucified on Twitter rn. No pun intended pic.twitter.com/4YigscQlQS

Cheer up breh you could be Spurs Jesus asking where’s the love. https://t.co/11o8fTTWwY

Dude, seriously. I’ve always wondered who Spurs Jesus thinks he is. He put on a costume one day and, like, we’re all expected to swoon? I don’t *think* so. 🤣

Spurs Jesus is literally a grown baby. Was rude as fuck when I met him many years ago and I have never liked him since.


Some basketball fans, however, were most turned off by Spurs Jesus wanting the same star treatment as Bhatia.

Spurs Jesus - or whoever that clown is - is doing it for attention. Nav is doing it because he loves the Raptors franchise.


On top of sharing his frustrations on a post that had nothing to do with him, Spurs Jesus also compared himself to Bhatia, a man who fled India in the 1980s to save himself from the violent persecution of Sikhs, struggled to find work in Canada as a mechanical engineer and began selling cars instead. Not to mention, this guy sold so many cars he was able to buy the entire dealership after just two years — the beginning of a string of successes that have earned him a net worth of $50 million.

And with that money, Bhatia has created the Superfan Foundation to bring the diverse people of Canada together to enjoy the sport. He spends a reported $300,000 annually so that thousands of kids can attend Raptors games.

But why would Spurs Jesus compare himself to Bhatia, a legit superfan, when he thinks of his personality as a "brand," according to a LinkedIn profile belonging to the man behind the garb, Cordero Maldonado? To the public, Spurs Jesus describes himself as a superfan, celebrity and philanthropist, his website reads. While most of the site is only accessible when you create an account, the one section completely open to any user is the online shop, which currently carries a selection of stickers, medals, T-shirts and posters.

But Spurs Jesus has benefitted from thinking of the gimmick as a brand beyond selling merch. He's verified on Instagram. He's had longtime partnerships with Best Tickets and Papa John's. He was voted Best Local Celebrity in the Current's Best of San Antonio poll in 2016 and 2018, and even appeared on the cover of the 2016 College Guide. He's invited to VIP events — both Spurs-related and not — that most locals would never get to experience. Heck, he's met Spurs players on multiple occasions.

While Spurs Jesus may not get the recognition he wants from Spurs Sports & Entertainment, he has gotten plenty of love from San Antonio.

Such may not be the case much longer.