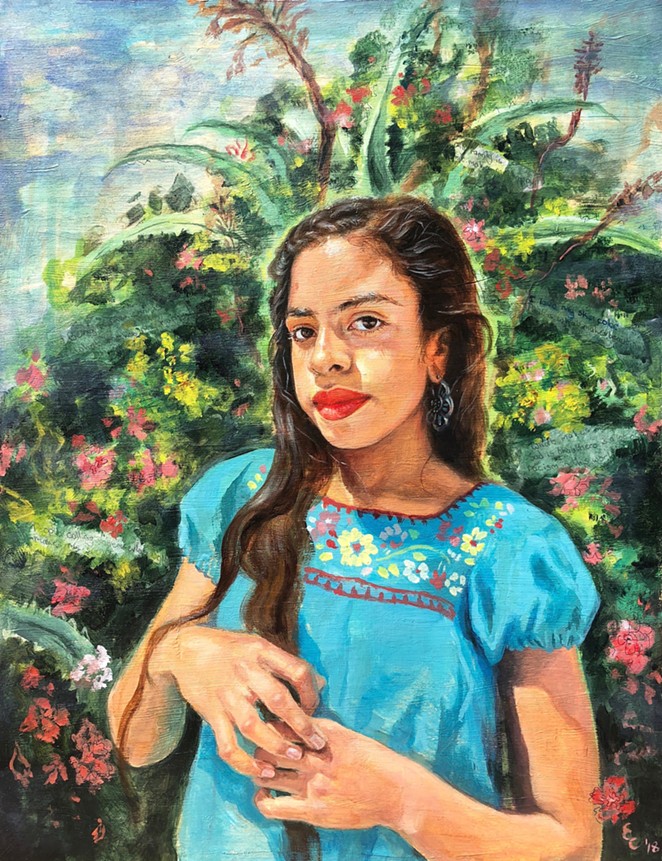 The Centro de Artes is dedicated to “telling the Latino experience with a focus on South Texas,” and two new exhibitions opening February 13 allow it to do just that.

With “XicanX: New Visions” and “Los Maestros,” the center looks back at the “maestros” of Chicano art while highlighting young and emerging artists of today. Together, the shows allow for an intergenerational dialogue between artists and viewers.

Presented on the gallery’s first floor is “XicanX: New Visions,” a national exhibit curated by the local artist team Dos Mestizx (Suzy González and Michael Menchaca). As evident by the title, this show challenges many of the traditional ideas tied to Chicanx or Latinx identities and socio-political issues. The exhibition uses the evolution of the term Chicano to Xicanx, which came to bear to allow the inclusion of queer, feminist and activist artists in a mostly straight, male-dominated genre. The first “x” in Xicanx is a reference to Nahuatl, one of the indigenous languages of Mesoamerica, and the “x” at the end serves as an alternative to the gendered -o/-a suffix.

On the second floor, the Centro de Artes takes it back to the beginning with “Los Maestros: Early Explorers of Chicano Identity,” an exhibition curated by the Centro Cultural Aztlan. This exhibition is unique in that it highlights the work of three underrepresented founders of San Antonio’s Chicano arts movement: Jesse Almazan, Jose Esquivel and Rudy Treviño. All three were members of Con Safo, one of the earliest and most significant artist collectives of the Chicano arts movement. “Los Maestros” will also be the first public showing of Almazan’s work since his death in 2002. The show serves as a reminder of the significance of San Antonio artists within the Chicano arts movement.

In the 1960s and 1970s, Chicano artists were often shunned from mainstream galleries and institutions, so they had to organize their own groups, exhibitions and galleries in urban centers throughout the Southwest. Heavily influenced by the Chicano movement, Chicano art was an attempt by artists to create a unique artistic identity. Together and individually, these innovators explored uncharted territory and opened new doors for future generations of creators.