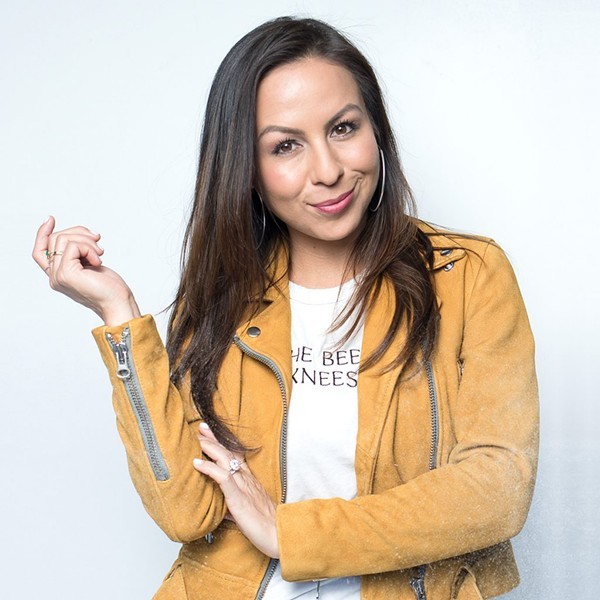 Standup comedian and actress Anjelah Johnson is hosting and headlining the Ha Comedy Festival in San Antonio from February 21-23. The Current got a chance to speak with the former MADtv star about her earliest comedy influences and what an event like the Ha Comedy Festival means for Latino comics nationwide.

Johnson will take the stage at the Empire Theater on February 23 at 5 p.m. for a special TV taping of her set, which will air on HBO Max later this year.

You were a teenager back in the 1990s when the Latino Laugh Festival featured comedians like Cheech Marin and George Lopez. Did you know about that festival or did your interest in comedy come later?
When I was a teenager, I didn’t grow up knowing famous comedians. I used to watch BET’s ComicView. That was my first introduction to standup comedy. I would watch it even though they would say bad words and I wasn’t allowed to say bad words. When I was in my 20s and I moved to L.A., the first comedy album that I owned was from George Lopez. My cousin gave it to me. George Lopez was my first comic headliner whose CD I would play while folding my laundry or cleaning my room.

So, he also must’ve been the first comedian you listened to who was Latino, yes?
Yeah! I didn’t know of any Latino comedians before him.

The Ha Comedy Festival seems to really be distancing itself from some people’s perception of Latino comedy as being the kind of comedy that focuses on stereotypes and tropes. Do you see how the style of comedy has changed for Latino comedians over the last 30 years?
Comedy in general has changed, not just Latino comedy. We have changed as a society. We’re embracing comedians more and there is a lot more crossover. If you were to ask a teenager today, “What do you know about comedians?” they would be able to name all kinds of different colors of comedians. That’s what’s in social media and in their feed and on Netflix. Comedy all around has changed. I’m grateful that Latinos are a bigger part of the game now.

But do you think we see less stereotypical humor from Latino comedians today than we did back then?
I would stay that stereotypes are less prevalent and authenticity is what is taking center stage, which is amazing. You can have my friend [comedian] Cristela Alonzo talk about her childhood and growing up with a Latina mom. She would get asked that question with her sitcom [Cristela]. People would ask her, “Why do you have a stereotype of a Latina woman playing your mom?” She would say, “That’s not a stereotype. That’s my mother.” When it’s authentic to you, talk about it. That’s what we’re seeing more now. So, if you do hear a chancla joke, it’s authentic to that person.

At the same time, something the Ha Comedy Festival decided to do is vet its comedians’ jokes, so they could avoid the chancla jokes. How do you feel about that? Would you let someone vet your material before you performed at a festival?
No, I wouldn’t, but I also understand it, especially if the whole goal of the festival is to shine a new light about what Latinos are talking about in comedy. I would want to see if someone was coming with some hacky-type, stereotypical jokes. Once I got notes back from [producers] about material I was going to do on a particular late-night show and they wanted me to rearrange one of my jokes. I refused. Things like that are where I draw the line.

What excites you the most about a comedy festival exclusive to comedians who are Latino?
I’m most excited about opportunity – the opportunity for these up-and-coming comedians and the more established ones to come together and have a place where we can shine. Don’t sleep on us. We need more representation because we’re doing some really amazing things. I also think that this festival is going to show people who come to it that we’re worthy of support from our own people.

Do you think we need more Latino audiences supporting Latino entertainment in general?
Well, like if a movie comes out for the black community, like Madea Part 17, it has so much support from that community. If a movie comes out that is about a Puerto Rican family, you have Mexicans saying, “That’s not me. That doesn’t represent me” and you have Cubans saying, “I didn’t grow up like that.” Sometimes there’s division within our own people. I think another aspect of this festival that is so important is for the people who are going to be watching it. We’re going to be reminded of how we are all similar.